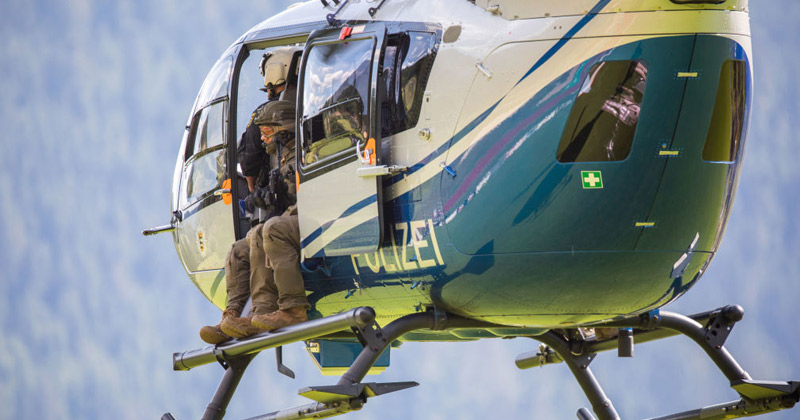 German police have launched a huge manhunt involving hundreds of officers, special forces and helicopters, to locate a man who’d earlier disarmed four of their colleagues, in a brazen broad daylight attack.

The suspect is “violent and armed with several firearms,” police in the southwestern German state of Baden Wuertemberg were warning, urging people in the town of Oppenau, not far from the border with France, to stay at home. People were also being urged to avoid forest areas as well as not to take any hitchhikers in the area, under any circumstances.

The threat posed by the 31-year-old is apparently so high that the police decided to openly reveal his full name and to show his photos on a wanted list it published on its website – an uncommon tactic for German law enforcement.

The suspect, identified as Yves Etienne Rausch, is described as a 170-cms-tall man with a bald head and a goatee beard wearing glasses and a camouflage outfit.

Although, he does not appear to have a particularly intimidating appearance, the man still managed to disarm as many as four police officers in just one attack and took their weapons. It all started as a somewhat routine ID check when someone alerted the police on Sunday morning about a suspicious looking individual armed with a bow and arrows.

Approached by the four officers, the man initially seemed to be cooperative only to suddenly pull a pistol he also had with him and turn it on the officers before they had an opportunity to react. Brandishing his weapon, he threatened the officers and forced them to surrender their service guns before fleeing to the woods.

Now, he is believed to be in possession of four Heckler & Koch P2000 guns with up to 16 rounds of ammunition each, which means a total of up to 64 shots in addition to the weapons he already had.

The police immediately launched a manhunt for Rausch. Authorities blocked several roads in the area and declared a no-fly zone of three nautical miles (5.6 kilometers) around Oppenau. The large-scale raid was joined by police-dog handlers and Special Forces teams, while helicopters were patrolling the skies as hundreds of officers raided potential hideouts in the area.

All their efforts during more than 24 hours have, however, been in vain. The fugitive, quickly dubbed ‘forest Rambo’ by some media, has vanished without a trace in the Black Forest – a large, forested mountain range stretching along Germany’s border with France.

Rausch had “no permanent” residence in the area, according to police. The German media reported he’d been evicted from an apartment for not paying his rent about a year ago and was actually homeless ever since. He also reportedly lived in a hut on the forest edge for weeks and, apparently, had enough time to study the terrain.