With the family and feasting of Thanksgiving, comes the shopping and hysteria of Black Friday. Retailers across the nation drum up excitement in hopes of getting out of the red and into the black before the end of the fiscal year. 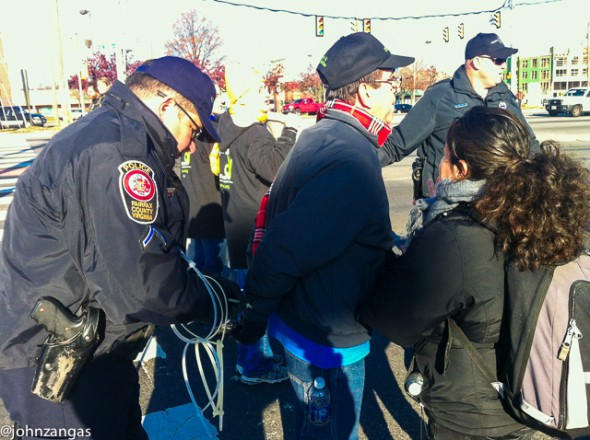 Protesters of Wal-Mart this year held demonstrations to draw attention to what they deem are substandard wages by these very retailers.

Demonstrations were held outside 1,500 Wal-Mart locations across the country. United Food & Commercial Workers (UCFW) planned the protests by current and former Wal-Mart employees as well as labor activists.

They believe Wal-Mart should raise the minimum wage to $12.50 per hour. This would boost a full time employees salary from $17,000 per year to $25,000 per year. Workers rights group “Jobs with Justice” says it’s not fair that American taxpayers are forced to subsidize the profits of one of the world’s most profitable companies, because the company refuses to pay a living wage to their people. Employees who can’t afford their bills turn to taxpayer provided programs like welfare, food stamps (SNAP), WIC, Section 8, and other support for those in poverty. Jobs for Justice says Wal-Mart, like many companies they allege, can afford to pay more.

Los Angeles Times reported one protester dressed as Santa Claus arrested. In Dallas, there were 13 protesters arrested. Union representatives said there were arrests of 10 in Chicago, 18 in DC, 15 in LA, 15 in Seattle, and 15 in Sacramento. 26 were arrested in St. Paul, MN. Over 100 arrests around the country have been reported by Saturday morning.

Wal-Mart has 1.4 million employees in the U.S. Rally organizers are asking for $25,000 per year income for employees, saying it would give workers “more purchasing power, create more jobs, and improve the economy.”

One of the key ways Wal-Mart and other large corporations have learned to stifle demonstrations is trespassing lawsuits that ban protesters from their property. This is where the arrests seem to be coming from.

It has come out in the past that the National Labor Relations Board (NLRB) has paid strikers with $50 gift cards. NLRB says this is to compensate people who really can’t afford to take a day off work and strike, but that need to make their voice heard or nothing will change.