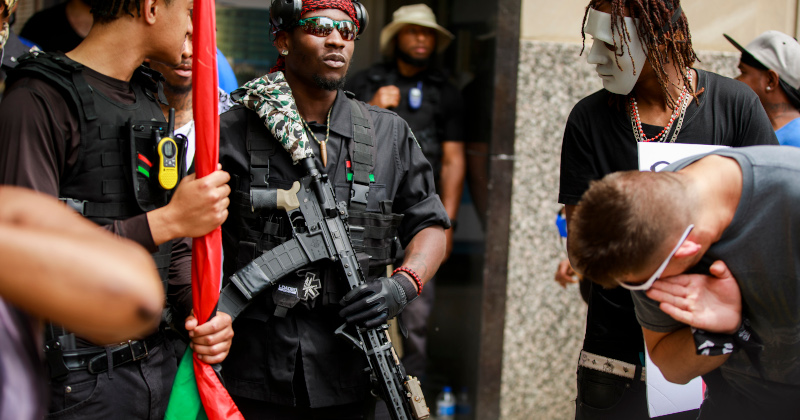 As radical leftists attempt to create a utopian “police-free future” society and defund law enforcement across the country, terrified African Americans interested in buying guns have soared in the age of social unrest.

In fact, in the age of President Trump, firearm retailers across the nation have reported a rise in the number of African Americans interested in purchasing guns. As of recent, especially with social unrest across many inner cities, and now, radical leftists are attempting to defund and disband police forces, gun ownership among blacks is quickly gaining popularity, which could prove disastrous for anti-gun Democrats come election season.

NAAGA started with one chapter in Atlanta in 2015 and now has over 100 chapters nationwide and 40,000 gun-toting members. The group said more than 10,000 of the members joined this year alone.

Philip Smith, the president and founder of NAAGA, has been shocked by all the new growth in members.

“Today, we’re getting so many different types of folks,” Smith told The Daily Beast. “Doctors, engineers, unemployed state workers, federal workers, policemen, military. We even have white, Latino, and Asian members. You can be gay, straight, loud, quiet, dorky, rich, or poor.”

In early March, Asian-Americans were panic hoarding weapons and ammo in California as many feared the pandemic would trigger social unrest.

Rik Stevenson, founder of the NAAGA chapter in Grand Rapids, Michigan, and now a Gainesville, Florida resident and teacher at the University of Florida, said, “black people are seeing that they are targets,” which is one of the main reasons the group has gained so much popularity, as of recent.

Stevenson said he never expected to be a gun owner, but now he’s packing a “Glock 23.”

Mel Atkins, a firearms instructor and deputy for the Kent County Sheriff’s Department in Michigan, said expanding the gun culture to his community has been transformative. Atkins owns 30 guns and considers himself the lone black guy with guns in Michigan.

“Black people still aren’t very social about their firearms,” Atkins told The Daily Beast. “Our state (Michigan) allows me to walk around with a firearm on my hip or strung across my shoulder as long as it’s visible to everybody. Black people never do that. Only damn fools and maybe some Republicans ever do that. And black gun owners are very quiet about it, because historically a black gun owner could get in trouble for it. There’s that stigma attached to it, that I’m going to get hassled by law enforcement for the mere possession of a firearm.”

Black folks interested in purchasing guns before this year’s chaos was a well-defined trend. But now, more than ever, these folks are arming themselves as they see their communities, already devastated from decades of wealth inequality, on the brink of even more disaster as social unrest, the disintegration of law and order, and high unemployed could result in a turbulent period where a firearm is a necessity for survival.

Folks in inner cities see the writing on the wall. Their politicians, mainly anti-law liberals, are pushing hard to collapse America’s police forces, which would transform communities into lawless warzones where gang warfare would dominate the streets (already happening in Baltimore City and Chicago).

The push for guns by black residents is the result of America’s inner cities imploding. It’s going to get a whole lot worse before it gets better.