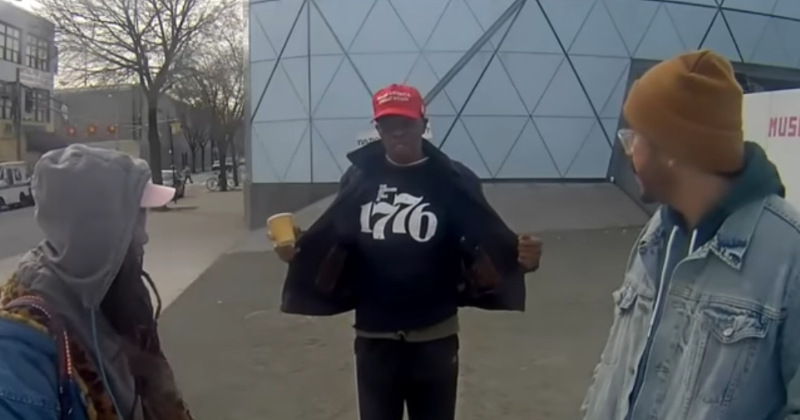 A black Trump supporter wearing an Infowars shirt unleashed a righteous fury on Shia LaBeouf’s “He Will Not Divide Us” livestream exhibit.

Sporting an iconic “The Answer to 1984 Is 1776” tee and bright red “Make America Great Again” hat, the man charged the camera while two startled onlookers observed.

A demonstrator at the back of the lot held a sign reading “Nanothermite” – a reference to a hypothesis about how the Twin Towers were taken down on September 11, 2001.

“You’re talking about the Super Bowl? F**k the Super Bowl. Our Super Bowl was November 8 when we elected Donald J. Trump to become our new president.”

He proceeded to lay into New York Senator Chuck Schumer, while producing a copy of the pocket-sized “Citizens Rule Book” that accompanies every Infowars merchandise shipment, and contains the Constitution, Declaration of Independence and the Bill of Rights, amongst other critical documents.

He addressed the failing Democratic Party, “If you want to come back to the forefront, here’s an idea: adopt Donald J. Trump’s agenda… You’re nothing but a cult.”

After eviscerating the pro-abortionists of the ‘Million Woman March,’ calling them “Satanic murders,” he moved on to address the importance of people of all races and creeds to unite in moving American society forward, even solo-chanting, “All Lives Matter.”

“I’m about ready to tell you how you’ve been played,” he said, referring to the inverted reality social architects, academia, and the mainstream media have created. “If you ever want to understand how the world is going, this is what you do, ladies and gentlemen: You turn everything upside down – because what they’ve been teaching you is a pack of f**king lies.”

“You’ve been brainwashed. The global elites are running this country… If you don’t have a border, you don’t have a country. Not every freaking Muslim is adopting our principles. We don’t want Sharia Law.”

He blistered “globalist Soros, globalist Clinton, globalist Obama,” saying, “I’m sick of this. He is not dividing us – this is propaganda. Edward Bernays – read the book Propaganda,” he said, referring to Bernays’ highly-influential 1928 book on social sciences and psychological manipulation.

The anti-Trump performance art piece was scheduled to run for four years straight, but it was just shut down by the Museum of the Moving Image, which was hosting it, due to too much heated conflict and it serving as a “flashpoint for violence.”

LaBeouf’s exhibit has not gone as planned, especially since his on-camera arrest in its first days. However, it has produced a treasure trove of new patriot stars, such as the “Old School Astoria” Greek boys and the “Asian Trump Supporters.”

He Will Not Divide Us has provided a stark look at the massive cultural shift that is now taking place in the United States.