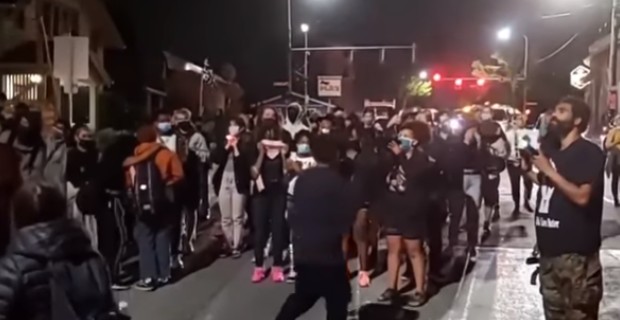 A video out of Seattle shows a mob of Black Lives Matter agitators harassing a homeowner and demanding that they give up their property in order to fix racism.

The clip shows a male demonstrator singling out one home and lecturing those inside about how they’re “living in a historically black neighborhood.”

He then accuses whites of buying land and homes from black people for below its market value and kicking out African-Americans.

Black Lives Matter mob demands White people move out of neighborhood and give their homes to black people. pic.twitter.com/K2ywb899zS

“Do you know that? Because if you don’t, now you fucking do, now do something about it,” he adds, to which another protester responds by saying, “Open your wallet!”

He then accuses the homeowners of being complicit in “racist gentrification” while demanding they do something to fix the problem.

A masked female BLM agitator with a bullhorn then continues the tirade.

“Give us your house, give black people back their homes, you’re sitting there comfortably…I used to live in this neighborhood and my family was pushed out and you’re sitting up there having a good time with your other white friends.”

“Now we’re bringing it to your front door, so what the fuck do you plan to do about it?” asks the male protester as the mob continues to harass the homeowner.

The video ends with the homeowner apparently turning the lights off in a bid to avoid any further escalation.

The seizure of white-owned property has long been a primary goal of the Black Lives Matter movement.

Back in 2017, BLM leader Chanelle Helm issued a list of demands, one of which was that white people will their property to black people in order to prove they’re not racist.

“White [people] if you don’t have any descendants, will your property to a Black or Brown family,” she wrote.