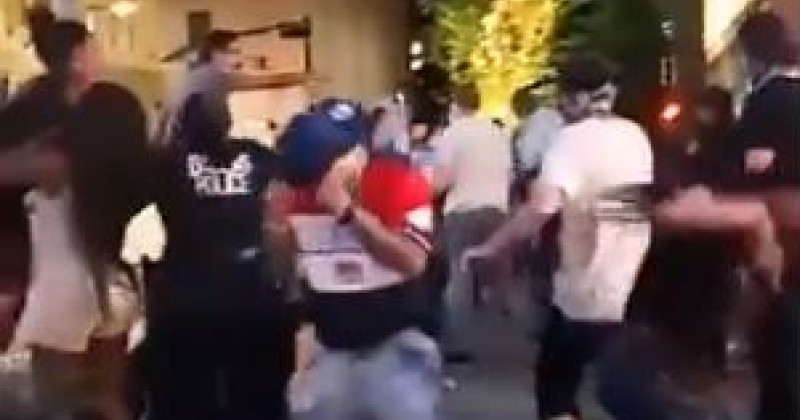 Black Lives Matter protesters invaded a restaurant in Dallas and tried to start fights with diners in yet another instance of mindless chaos.

The whole incident was caught on camera by an African-American man called Damani Bryant Felder who denounced the mob as “ruining an otherwise peaceful evening with their BS.”

The video shows the mob, which consisted mainly of white people, shouting about George Floyd as bemused diners looked on. Two of the tables nearest the protesters are occupied by black families.

The mob proceeds to shout swear words in the direction of little black children, before fights begin to break out.

I was enjoying dinner with friends when this protest broke out. Watch it all. They ruined a perfect evening. My apologies for any profanity I let slip.

“They create the unrest then they get upset when someone actually speaks up for themselves,” states Felder.

Some of the mob then began throwing objects at the diners as Dallas police were forced to make arrests and use tear gas.

“This is marxism, cultural marxism to a tee, they did not come out here to be heard, they came out here to create a scene,” states Felder, noting that the restaurant was full of both white and black people, as well as a black musician, enjoying a peaceful evening before BLM agitators showed up.

“They came out here to create a scene and now they’re acting like they’re the oppressed people,” asserts Felder, adding, “They brought this on this entire establishment because they cannot fucking behave and they can’t learn to express themselves like adults.”

“All they care about is creating this manufactured outrage, this chaos, their rationale is ‘if we are upset no one else can enjoy any peace whatsoever’,” said Felder.

The clip then shows the protesters running away as more police move in and families look on in fear.