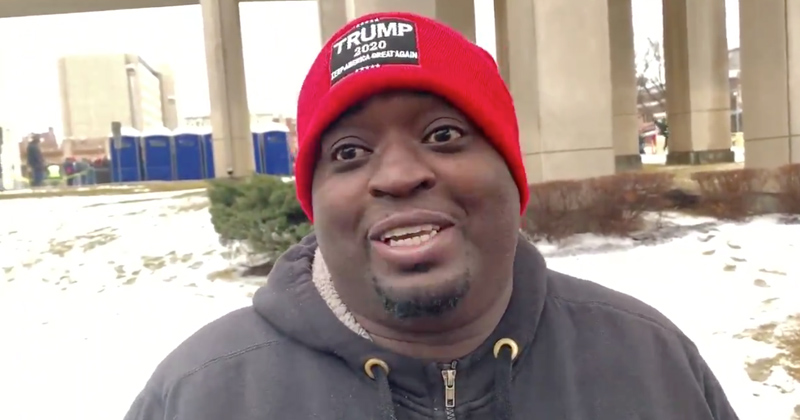 A black Trump supporter from Wisconsin said he refers to Trump as “the blackest president ever.”

Antwon Williams explains why he is a #Trump supporter. #TrumpRally pic.twitter.com/PJiAGU8snK

In an interview with local media outside a Trump rally in Milwaukee last week, Antwon Williams broke down how Trump has helped the black community rise out of poverty, and revealed why he tells people Trump is the blackest president ever.

“Before Trump came into office the biggest problem we had in the black community is the fact that all the Mexicans and illegals come in and they, you know, they take all the landscaping jobs, the painting jobs, all the big contractors, because they can come in and work illegally and, you know, just pay one another under the table much of nothing,” Williams explained.

“And people are like, ‘Well what that got to do with Trump?’ It has all to do with Trump,” Williams said, “because of the simple fact, when they’re taking the business from us, then us as blacks – that’s how we stay in poverty.”

“The whole point of getting us out of poverty is the fact that we can get out and work again, you know?”

Williams said he ignores people who call him racist and said his family is doing better with Trump in office.

“And people can call him racist all they want, but the way I say the hell with them, point blank, period,” he stated.

Trump supporters sound off at the #TrumpRally in Milwaukee pic.twitter.com/HTDSz94aA4

“Like, dude, he’s helping me and my family. We never owned a house before Trump came into office; now we own a home. I own cars. Our family is doing great, you know? So, the hell with what people say.”

Williams also said one of his favorite things about Trump is his “realness,” which he thinks makes him “the blackest president.”

“It’s not such a race thing with me, it’s just realness, you know? And I tell people, ‘Trump the blackest president we’ll ever have.’ And, you know, people don’t understand why I say that and they get mad cause of Obama, of course, but with me, if you ask me directly, hell think about blacks – we say what we want, when we want. Either you’re with us, or against us, and these are the things that Trump stand on. He’s not gonna care. No one is gonna shut him up. He’s not a politician. He’s just simply running this country as a business, and I love every second of it.”

The media tried to spread rumors that the recent open carry 2nd Amendment March held in Richmond, Virginia was a white supremacist gathering. Nothing could be further from the truth. Millennial Millie interviews several Black Americans about gun rights and feel about Governor Northam’s new strict gun control laws.