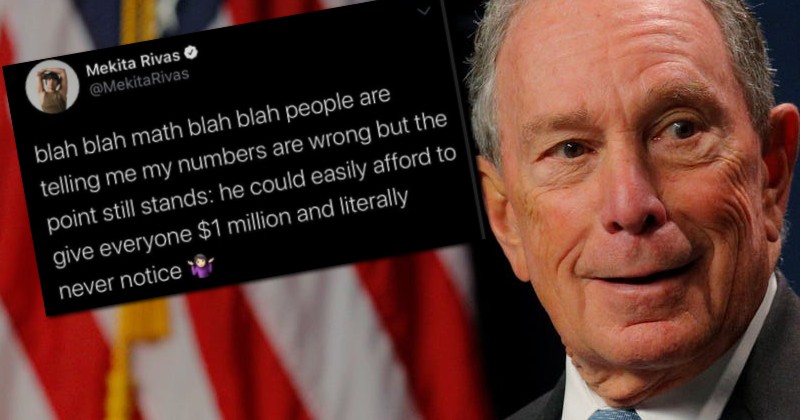 The Washington Post journalist who was humiliated after claiming Mike Bloomberg’s $500 million ad spend could have been used to give every American $1 million dollars responded to the controversy by tweeting “blah blah math blah blah.”

As we highlighted earlier, Mekita Rivas responded to Bloomberg dropping out of the presidential race by claiming that the money he spent on campaign commercials could have made every American a millionaire with lots of spare change.

With math obviously not being Rivas’ strong point, it was immediately pointed out that Bloomberg’s $500 million doled out to all 327 million Americans would mean they get just $1.53 each.

That didn’t stop MSNBC’s Brian Williams and New York Times editorial board member Mara Gay repeating the claim as if it was accurate.

“Actually with the money he spent he could have given every American a million dollars,” said Gay incorrectly.

“It’s an incredible way of putting it,” responded Williams.

Instead of holding her hands up and taking the L, Rivas absurdly doubled down.

Oh my gosh. @MekitaRivas doubled down! Wrong again. One would need $327 trillion to give each American $1m. Bloomberg is worth $65b, which equals around $200 per American. This is why socialism is gaining traction because government schools suck at teaching basic math. pic.twitter.com/rao57kq69n

Tweeting from behind a locked account, Rivas reacted to the farce by asserting, “blah blah math blah blah people are telling me my numbers are wrong but the point still stands: he could easily afford to give everyone $1 million and literally never notice.”

She was swiftly corrected once again.

“Oh my gosh. @MekitaRivas doubled down! Wrong again,” tweeted Terry Schilling. “One would need $327 trillion to give each American $1m. Bloomberg is worth $65b, which equals around $200 per American. This is why socialism is gaining traction because government schools suck at teaching basic math.”

Perhaps Rivas should de-activate her account and shut up for a while.

However, with the current state of journalism, she’s more likely to get a promotion from the Washington Post.