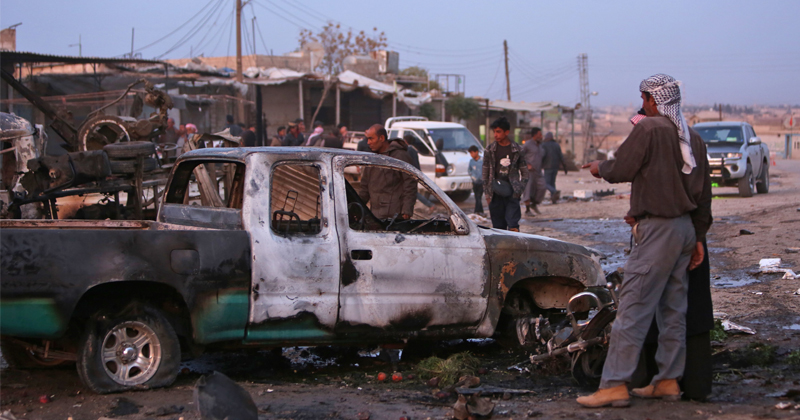 The tragedy comes just days after another car explosion left at least 10 people dead and 25 injured in the town of Tell Abyad near the Syrian-Turkish border.

A car bomb attack near the city of Ras al-Ain in northern Syria has claimed the lives of 17 people, the Turkish Defence Ministry said in a statement on Tuesday.

The Ministry said that the Kurdish YPG militia, which Ankara labels a terrorist group, was responsible for the attack.

Showing a much worse attitude than DAESH, the PKK/YPG terror group continues its car bombings aimed at civilians. The child murderers this time detonated a car bomb in Tel Halef village west of Ras al-Ayn, killing 17 people and wounding more than 20. pic.twitter.com/vaZI15cMg4


Earlier, SANA news agency reported that a number of civilians were killed while others were critically injured after a car bomb exploded in the town of Tel Halaf, west of the city of Ras al-Ain on the Syrian-Turkish border.

The Turkish-Syrian border has been rocked by deadly incidents in recent weeks despite the end of the Turkish-led offensive launched last month.

Several weeks later, the operation came to a halt following lengthy negotiations between Russian President Vladimir Putin and his Turkish counterpart Recep Tayyip Erdogan in the Russian city of Sochi.

Under the agreement, Russian military police and Syrian border guards committed themselves to facilitating the withdrawal of Kurdish militia from an 18-mile border zone, outside the area of the Turkish military’s ‘Operation Peace Spring.’ Russia and Turkey have since begun joint patrols along the border.

The Bill of Rights is under assault.