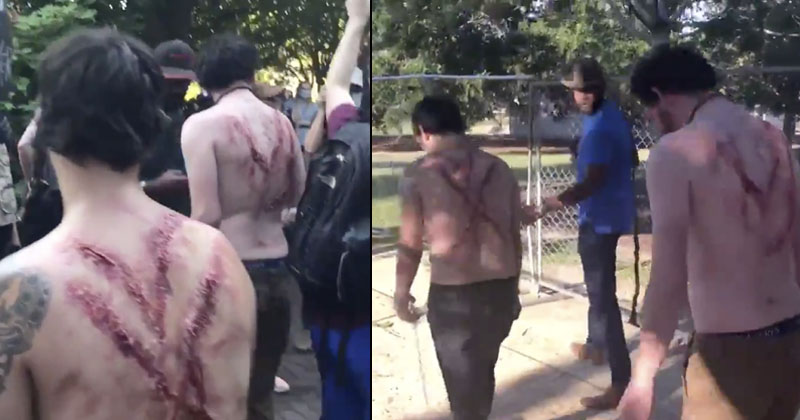 A group of Black Lives Matter protesters got into it with another group of self-hating whites who showed up in chains and back lashings to demonstrate alongside them.

The self-hating white group, who call themselves Stand As One, appeared to have offended the BLM protesters in Charleston, South Carolina, because of their shockingly realistic appearance as abused slaves clad in chains, complete with cosmetic bloody whip lashes on their backs.

This group, which self-identified as Stand As One, is now getting yelled at by BLM. The two are arguing about the their message. The group who brought the slave demonstration were told to leave and exited Marion Square. pic.twitter.com/ZJROYJVfHj

The white guilt group was eventually pushed out of the area by the BLM protesters, who were in Marion Square on Monday calling for the removal of a statue of John C. Calhoun, a pro-slavery Democrat vice president, when the virtue-signaling liberal whites arrived.

“What if the roles were reversed?!” yells a black member of the “white slave” group as the “woke” whites frog marched single-file in a line, dirty, humiliated, and chained up while led by a black “slave owner” yelling things like “don’t look in my eyes!”. A sign can be seen reading “What if this was your history?”

Shameful. This group of woke protesters in Charleston "reversed the roles" in slavery. pic.twitter.com/buGflPF5FL

As one Twitter user noted, the white slave demonstration was really about exacting racial revenge, not seeking justice or equality.

So it is about revenge.

Charleston Mayor John Tecklenburg had announced last week that the Calhoun statue would be removed, but didn’t specify the exact date, marking another capitulation to the leftist mob.

Were the Hebrews low-bid contractors for the pyramids or were they slaves? Did Jesus hiding in Egypt mean he was black? Were Egyptians black? Is Shaun King (BLM leader pushing this) black or a guilty white liberal, a male Rachael Dolezal?