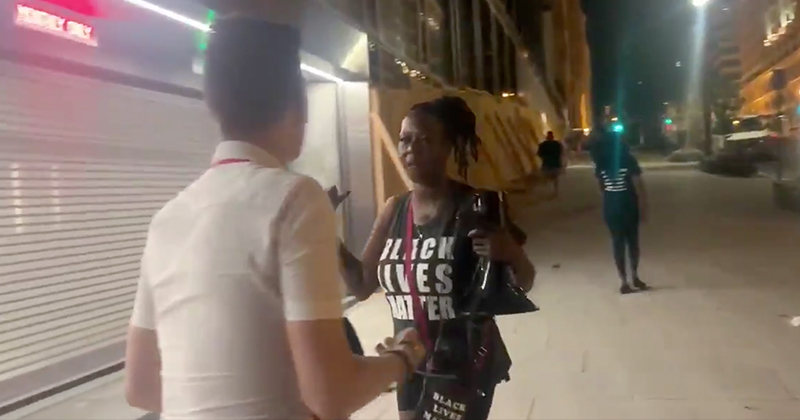 After Thursday’s RNC finale, hoards of BLM, Antifa and other left-wing protesters harassed and attacked Trump supporters in the streets.

Of the many assaults caught on camera, one included #WalkAway founder Brandon Straka and his friends being attacked by a group of BLM “protesters.”

As soon as the camera starts rolling a woman is seen throwing a cup at Brandon as another person calls his friend a “f*ggot.”

“He’s a Donald Trump supporter,” one of the assailants shouted out in defense of the unprovoked attack.

Next, one of the women rushed towards the men and knocked the phone out of Straka’s hands.

Considering the fact that Straka is in fact a homosexual, did these far-left BLM supporters commit a hate crime?

I haven’t endured an anti-gay attack like this in probably 10 years. #BlackLivesMatter activists physically assault me & Mike Harlow on our way into our hotel, calling us faggots & threatening us. The one girl comes back & knocks my friend’s phone out of her hand.#BLM= violence pic.twitter.com/Cmhc4g57tU

Senator Rand Paul (R-KY) and his wife were also attacked by the violent mob outside the RNC Thursday night.

Just got attacked by an angry mob of over 100, one block away from the White House. Thank you to @DCPoliceDept for literally saving our lives from a crazed mob.

Rand Paul just got chased by a crowd back to his hotel, after leaving the White House from Trump’s Republican Party Nomination #DC #DCProtests pic.twitter.com/h1kPcZG1jh

An elderly couple leaving the convention was attacked by the unruly group.

The BLM supporters shoved, punched, threw liquids on and shoved the man to the ground as he tried to walk down the street.

Elderly man assaulted by protesters near St. John’s in DC. He appeared to be walking with another elderly female wearing pro-Trump gear. pic.twitter.com/LoharqhA60

In another video, BLM thugs harassed a couple as they tried to walk to and enter their hotel, one woman screaming at the top of her lungs in a psychotic fit.

A couple who attended President Trump's speech are harassed by unhinged protesters as they leave the White House pic.twitter.com/6YdgozVulR

Police had to protect a man from the mob as they insulted him and pinned him against a fence.

This is the scene right outside the entrance to the White House as a police officer guards a man from protesters outside the fence pic.twitter.com/9wB1VoJ7Ow

Congressman Brian Mast (R-FL) was accosted by a group as well.

Another pair of RNC attendees were followed and insulted as they tried to enter their hotel.

In the video below, the group once again follows and screams at elderly people attempting to exit the convention.