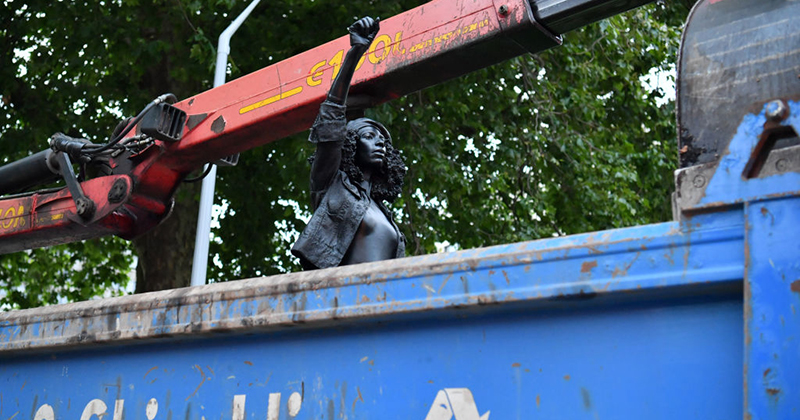 A black resin and steel statue, erected secretly in the dark of night where the figure of 17th century slave trader Edward Colston once stood in Bristol, has been removed by the city council after just one day.

Despite the artist claiming it would be “extremely difficult to move,” council contractors removed the Reid statue at roughly 5:20am local time on Thursday morning.

Quinn said he was inspired after seeing Reid standing on the empty plinth after protesters removed the original statue and unceremoniously dumped it in the harbor.

His piece is named ‘A Surge of Power (Jen Reid)’, and it will now be kept at a city museum where Quinn can either collect it or donate it, according to a tweet from the council.

Reid herself said she would “like the council to keep it [on the plinth], because obviously of what it represents and who was there prior,” but apparently city authorities did not agree.

Mayor Marvin Rees said that while he remained committed to building a city for all Bristolians, “the future of the plinth and what is installed on it must be decided by the people of Bristol.”

The removal of the over 100-year-old statue of the wealthy merchant, politician, and slave owner Colston came amid a groundswell of anti-racism protests across the world in the wake of the death of George Floyd at the hands of the Minneapolis police.

However, the replacement statue itself caused controversy and generated heated debate online, with many Bristolians praising the gesture, but others decrying how disrespectful it was.