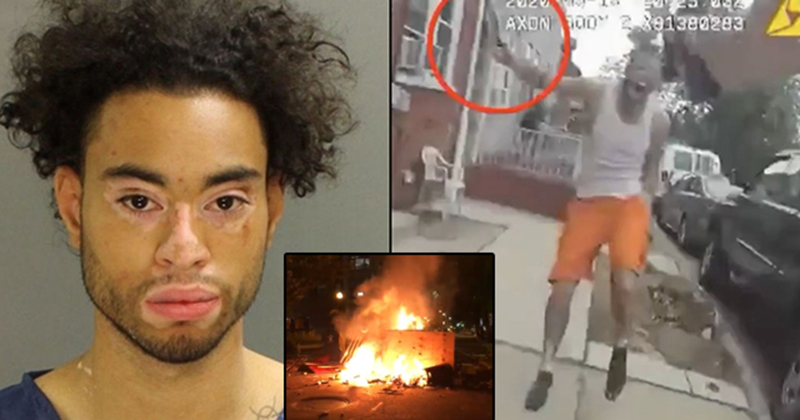 Black Lives Matter mobs rioted and looted in Lancaster, Pennsylvania on Sunday night after a non-white suspect was shot and killed while charging a police officer with a knife.

Lancaster Police on Sunday night rushed out video of the shooting to try and quell the BLM mob:

On September 13, 2020, at approximately 4:13 PM, Lancaster County-Wide Communications received a 911 call for a domestic in the 300 block of Laurel Street in Lancaster City. The caller related that her brother was reportedly becoming aggressive with his mother and was attempting to break into her house. Several officers from the Lancaster City Bureau of Police responded to the call and the first officer arrived at 4:24 pm. The first officer on the scene walked to the front of the residence and made contact with a woman, who was identified as a family member. A male subject then exited the front door of the residence and began chasing the officer. Preliminary information and body worn camera footage indicates that the male subject had a knife in his right hand as he was chasing the officer. The officer fired several shots from his firearm, striking the subject. The subject, identified as 27 year old Lancaster man, did not survive his injuries and was pronounced dead at the scene. The officer was the only police officer on the scene at the time of the shooting and his body worn camera was activated and recorded the encounter. Additional officers arrived a short time later.

The following footage was recorded on the officer’s body worn camera. The images contained in this video are graphic and may be disturbing. Viewer discretion is advised.

The assailant, Ricardo Munoz, was charged in 2019 for stabbing four people — including a juvenile.

Four people had to be taken to the hospital Monday night after police say they were stabbed following a physical altercation.

One of those victims is a juvenile male, who police say remains in serious condition.

[…] officers arrived to find Munoz standing on the sidewalk with a knife. When he saw officers, Munoz then held the knife to his own throat, police said.

Officers told Munoz to drop the knife, but police said he he did not comply. Munoz then tried to climb over a handrail toward the front of a residence, police said. An officer had to use a Taser to subdue him, and he was taken into custody.

[…] Police also said officers found a 16-year-old male to the rear of the property with “multiple injuries” as a result of a stabbing, police said.

– The juvenile male had stab wounds to his face, right thigh, left ankle, and the right side of his torso. He is in the hospital in serious, but stable condition.

– A 22-year-old woman suffered a slash injury to one of her hands. She was treated at the hospital and released.

– A 26-year-old man suffered a slash wound to his head. He was treated at the hospital and released.

– Another 26-year-old man suffered a stab wound to his left arm. He was treated at the hospital and released.

What happened with his charges is not yet clear.

Regardless, just as with nearly all of BLM’s heroes, you can tell he’s a real pillar of the community.

Riots broke out after word spread that an “unarmed,” “autistic,” “black” man or an “autistic 14-year-old child” was shot and killed by police.

LANCASTER: BLM riots kick off in Lancaster, PA after an officer involved shooting of a man armed with a knife

“Time to strap up.” pic.twitter.com/gmFrecicFR

“White allies” were used as human shields for the mob:

Organizers are putting white allies in front telling them they are the front line defending POC. pic.twitter.com/L4kEziQPyG

Black Lives Matter organizers in Lancaster command white allies in the front lines to get on their knees. pic.twitter.com/xvixE7mWFs

Police got the real story out extremely fast but the BLM mobs appear to have only grown.

PENNSYLVANIA: After the first round of tear gas deployed, protesters then regrouped on the police station ramp for another around

Police then open up the 2nd round of tear gas pic.twitter.com/kpPr9MXZqu

PENNSYLVANIA: Rioter gets shot in his testicles by a rubber bullet pic.twitter.com/i1BFojeIe7

BREAKING: looting has started in Lancaster at Villa athletic store approximately 1 hour 50 minutes ago according to the shop owner

It was too dangerous to follow them since there are no police pic.twitter.com/FQIH57hccy

BREAKING: cops are driving around, jumping out, running full speed at rioters and arresting them using marked vans

BLM and black bloc rioters in Lancaster, Pa. start a street fire after spending hours attacking cops and the police station with projectiles. They rioted because a cop killed a Latino man who charged at him with a knife. Video by @livesmattershow: pic.twitter.com/4V3AjrMSWp

Any excuse to riot and loot will do.

Not even Lancaster, Pennsylvania is safe.