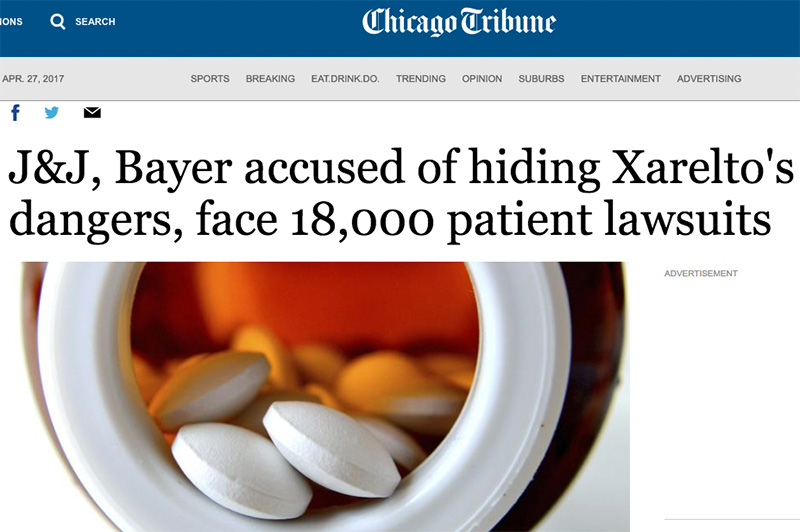 The first court test of Bayer/J&J’s billion-dollar bonanza, blood-thinner, Xarelto, is coming up in New Orleans next week. The outcome will influence how the 18,000 lawsuits behind it will be handled.

The plaintiff in the first suit is Joseph Boudreaux. “While Xarelto was supposed to help cut his stroke risk, Boudreaux says it instead caused internal bleeding that required a week-long hospital stay in the intensive-care unit, several blood transfusions and multiple heart procedures. ‘I don’t want anybody else to suffer like I have from that drug,’ the part-time security guard says,” reports the Chicago Tribune.

Lawyers for Bayer and J&J will argue, in the main, that Xarelto was approved by the FDA as safe and effective.

This is the normal front-line strategy in cases where the drugmaker believes it can’t be accused of purposely concealing a medicine’s dangers from the FDA.

“Well, the government says the drug is safe and effective, so what else do you want from us? We’ve done our duty. We’re off the hook.”

The last time I looked, the FDA doesn’t develop, manufacture, and sell drugs. Pharmaceutical companies do. If their drugs kill people and maim them, why shouldn’t they shoulder the blame, regardless of what a government agency says?

A simple change in law would remedy this situation: irrespective of what the FDA claims or doesn’t claim, ultimate accountability for a drug’s effects lies with the company that created it.

If you own a business that makes a product, and 18,000 people are lined up to sue you because they claim the product seriously harmed them, you’re the one who’s going to have to go to court and try to defend your actions.

You’re not going to be able to claim it was your second cousin’s fault or the man in the moon’s responsibility.

Even if we assume the FDA is honest and thorough and honorable (laughable, I know), they’re simply offering their assessment. It doesn’t matter that they’re the only body that can certify a drug for public use. That’s not a reason to exonerate a drug company.

Drug companies try to make hay from the fact that the FDA is certifying their medicines. “Don’t blame us. The FDA liked our drug. Blame them. And good luck with that.”

This would be like a mother saying, “Yes, I was in the park with my child, and yes, I wandered away to talk to an ice cream vendor, and I came back a half hour later to find her with a broken leg, but you see, it was my husband’s fault. He decided I would be competent to take care of our children…”

Forget all about the clinical trials of new drugs, and the published studies, and the back-and-forth between the pharmaceutical company and the FDA, and the FDA certifications.

It’s far simpler. It’s the sign in the store that says, “You break it, you pay for it.”

You break people, you pay.

The only ones who don’t understand that are criminals.