It was only a week ago when we wrote that the Financial Times removed the article “Gold Price Rigging Fears Put Investors On Alert”  from their website, a couple of hours after being published. We were able to dig up the original article in Google’s caching memory and took screenshots of the removed article.

The London gold fix, the benchmark used by miners, jewelers and central banks to value the metal, may have been manipulated for a decade by the banks setting it, researchers say.

Unusual trading patterns around 3 p.m. in London, when the so-called afternoon fix is set on a private conference call between five of the biggest gold dealers, are a sign of collusive behavior and should be investigated, New York University’s Stern School of Business Professor Rosa Abrantes-Metz and Albert Metz, a managing director at Moody’s Investors Service, wrote in a draft research paper.

“The structure of the benchmark is certainly conducive to collusion and manipulation, and the empirical data are consistent with price artificiality,” they say in the report, which hasn’t yet been submitted for publication. “It is likely that co-operation between participants may be occurring.”

The paper is the first to raise the possibility that the five banks overseeing the century-old rate — Barclays Plc, Deutsche Bank AG (DBK), Bank of Nova Scotia (BNS), HSBC Holdings Plc (HSBA) and Societe Generale SA (GLE) — may have been actively working together to manipulate the benchmark. It also adds to pressure on the firms to overhaul the way the rate is calculated. Authorities around the world, already investigating the manipulation of benchmarks from interest rates to foreign exchange, are examining the $20 trillion gold market for signs of wrongdoing.

The remainder of the article does not add particularly interesting information.

We have no interest in analyzing the findings of the research. Readers interested in a critical analysis should read Ross Norman’s comments, managing director of bullion company SharpsPixley in London (read analysis).

We would like to point out how Bloomberg’s news is no news at all. In the past two years, we released several articles in which gold and silver price manipulation was discussed at length, based on facts and figures, without any bias. Obviously, there was no reference from the mainstream media to any of these findings on our site or on similar precious metals sites (think of GATA, Goldseek, and the likes).

First, on November 30th 2012, a year and a half ago, we released an interview with statistical researcher Dimitri Speck. We explained that his research showed evidence of central banks influencing systematically the price of gold as of August 1993. Mr. Speck’s conclusion comes from intraday price statistics, where he observed several anomalies. First, since 1993, the price has been falling systematically during the trading session of COMEX in NY. Another trading anomaly is that during the PM fix the price systematically tends to drop significantly. The following chart is the result of 16 years of recording intraday data. The sudden price drops are so sharp and systematic, that it can only point to intervention. 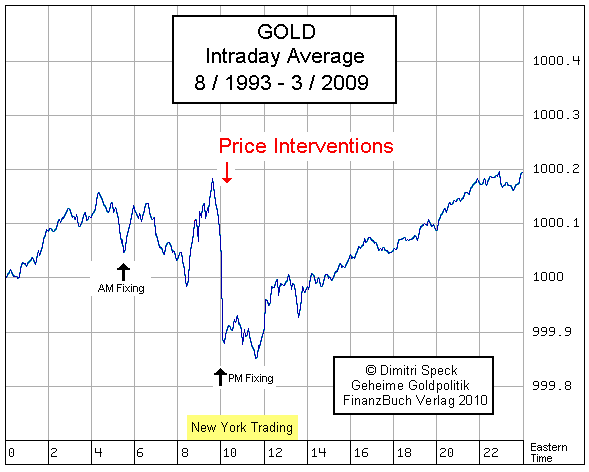 It was not only us who released this information. Dimitri Speck’s own website had existed for much longer and his work was released by GATA long before. The gold price manipulation during the London Fix was clearly much longer visible.

Bloomberg comes indeed very late with the “discovery” of gold price manipulation. Ironically, just two weeks ago, precious metals analyst Ted Butler explained here that Bear Stearns went bankrupt mainly because of excessive short positions on gold and silver in 2008. Butler wrote “What baffles me today is that no well-known journalist from outside the gold and silver world has yet picked up on what is an easy-to-document story of epic historical proportions. It’s the story of why Bear Stearns went under, and how the gold and silver price manipulation continued since the day JPMorgan took over Bear.”

JPMorgan’s real crime resides in its ability to sell unlimited quantities of COMEX silver contracts short on the way up in price to the point of creating unprecedented levels of market share and concentration. In December 2009, JPMorgan held more than 40% of the entire short side of COMEX silver and close to that market share on other occasions. To my knowledge, there has never been a greater market share or corner in any major market in history. These unlimited short sales by JPMorgan inevitably satisfy technical buying interest and then that technical buying turns to selling at some point, with JPMorgan then working to induce the tech funds into selling. The buying back by JPMorgan is the illegal ringing of the cash register and closing out of the manipulative silver short positions sold at higher prices.

Moreover, in 2013 – The Year of JPMorgan, Butler discussed evidence of JP Morgan’s market corners in both gold and silver:

While the London Fix price manipulation was already known for years (for instance by research from Dimitri Speck documented on several sites including ours), it is the COMEX futures dominant positions of JP Morgan that is an even bigger act of price manipulation. As usual, the mainstream media are running behind the truth and are not able to report on the most relevant facts. 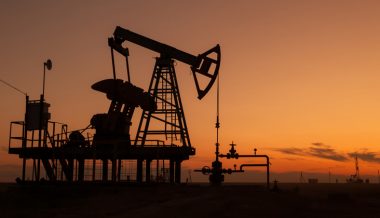