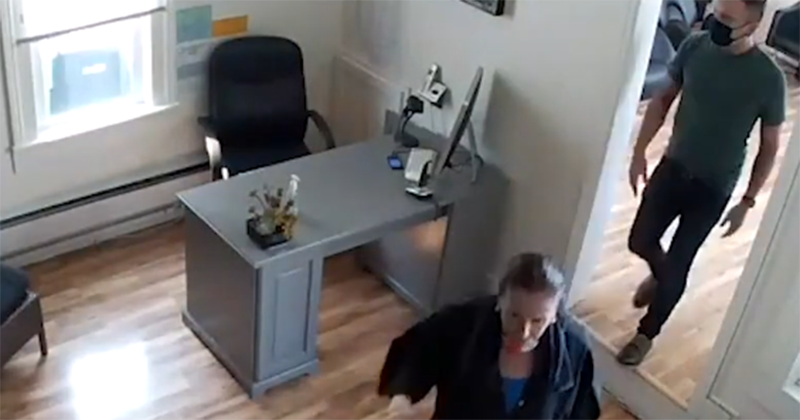 House Speaker Nancy Pelosi (D-CA) – who invited people to tour Chinatown in late February to prove that coronavirus was ‘no big deal’ – has just been caught ignoring a San Francisco city ordinance ordering hair salons to remain closed during the pandemic.

According to security footage obtained by Fox News, the 80-year-old lawmaker was seen at San Francisco hair salon “eSalon” Monday afternoon for a wash and blow-out at 3:08 p.m. according to a timestamp on the footage, which shows her walking through the salon without a mask over her mouth or nose.

Her stylist, however, can be seen walking behind her with a black face mask.

Salons in San Francisco had been closed since March and were only notified they could reopen on Sept. 1 for outdoor hairstyling services only.

Salon owner Erica Kious, in a phone interview with Fox News on Tuesday, shared details of Pelosi’s visit. Kious explained she has independent stylists working for her who rent chairs in her salon.

“One of the stylists who rents a chair from me contacted me Sunday night,” Kious said.

A screengrab of the text message she received from one of her stylists, and obtained by Fox News, said: “I’ll be there at 2:45 tomorrow. Pelosi assistant just messaged me to do her hair.”

“I was like, are you kidding me right now? Do I let this happen? What do I do?” Salon owner Kious told Fox News, adding that she “can’t control” what her stylists do if they rent chairs from her – as “they’re not paying” at this time.

According to Kious, Pelosi’s visit was like a “slap in the face.”

“It was a slap in the face that she went in, you know, that she feels that she can just go and get her stuff done while no one else can go in, and I can’t work,” Kious told Fox News, adding that she “can’t believe” the speaker didn’t have a mask on. (From the footage, it appears Pelosi had some kind of covering around her neck.)

We’re supposed to look up to this woman, right? It is just disturbing.

The fact that they did this, and she came in, it’s like a slap in the face.“

“The Speaker always wears a mask and complies with local COVID requirements. This business offered for the Speaker to come in on Monday and told her they were allowed by the city to have one customer at a time in the business. The Speaker complied with the rules as presented to her by this establishment.”

Not so fast, says Kious, who said Pelosi received a wash and blow-dry, but added that “you’re not supposed to blow dry hair” according to COVID-19 safety precautions for hair salons.

“We have been shut down for so long, not just me, but most of the small businesses and I just can’t – it’s a feeling – a feeling of being deflated, helpless and honestly beaten down,” Kious added. “I have been fighting for six months for a business that took me 12 years to build to reopen.”

“I am a single mom, I have two small children, and I have no income.”

I got 5 bucks that says @SpeakerPelosi has been taking hydroxychloroquine all this time, too https://t.co/1oOufLqubF