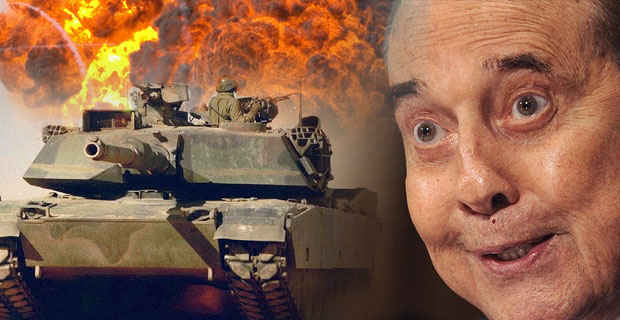 “There are a lot of things we could do. We could give the poor Ukrainians some weapons,” Dole told about 75 people in Kansas. “I think I would first of all send some tanks and some weapons to help the Ukrainian people. Putin would understand then that we’re serious. Those would be consequences.”

“We need to demonstrate to Putin, without sending troops over there, that we’re serious about the Ukraine and we want to help them maintain their liberty, and so far all we have are speeches saying there will be consequences,” Dole said.

He also said he would put a missile system in Poland on Russia’s border.

The authenticity of the photographs could not be independently verified, but despite this State Department spokeswoman Jen Psaki said Monday the images prove Russia is up to no good. “So these are just further evidence of the connection between Russia and the armed militants,” she said.

The State Department played an instrumental role during a coup in February resulting in the installation of Right Sector and Svoboda, two ultranationalist parties with neofascist ideology.