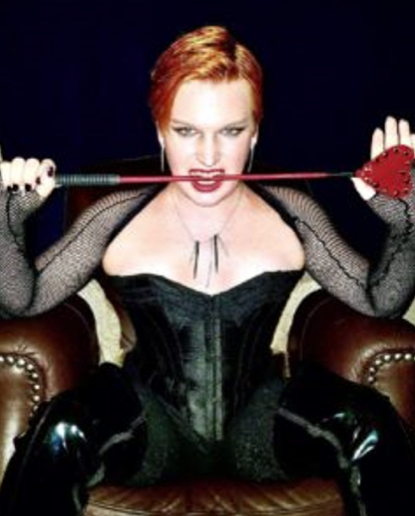 Investigators with MassResistance Houston claim they have uncovered the criminal record of yet another Drag Queen Storytime participant revealing a history of child sex crimes.

According to the investigation by MassResistance, which compiled records, a Houstonian by the name of William Travis Dees was incarcerated and listed as a high risk sex offender in 2004 after he abused multiple children.

Dees is now a member of the Space City Sisters, the group claims, a drag queen organization which conducts Drag Queen Story Hour for children at the Houston Public Library.

After months of investigation, MassResistance said they have been able to identify Dees as a Space City Sister who has multiple aliases.

According to MassResistance, evidence contained in the following extensive report exposes Dees, in yet another Drag Queen Storytime horror story.

Their report is presented below:

This is Elizabeth Anne Davidson/  aka Liz Davidson/ aka Liza Lot/ aka Sister Jeff / aka William Travis Dees.

This is William’s Instagram page where he goes by the name Liza Lott, a drag stage name that he uses.

William Dees is a Space City Sister that goes by the name of “Sister Jeff”. Space city Sisters are the Houston Chapter of Sisters of Perpetual Indulgence. 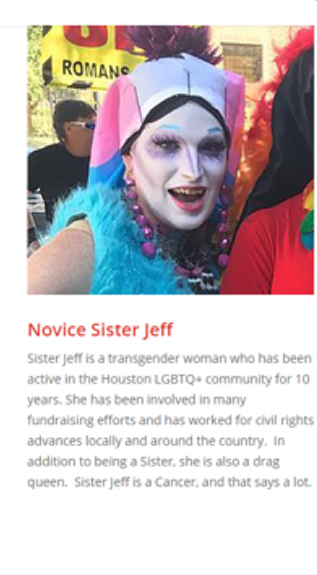 Here he is at the library where he was invited by library staff to be part of a team of organizers who greeted children at the library:  The library invited the Space City Sisters to greet kids and “make them feel safe” as they came to Drag Queen Story Hour…oh the irony.  Here is a link to a space city sister revealing the library reached out to them.  https://www.youtube.com/watch?v=OnTYR9s24gU

In the Instagram post below, Space City Sisters posts that they “had an amazing time helping the children feel welcomed and assuring them past ‘hate groups’ to Drag Queen Story Hour. 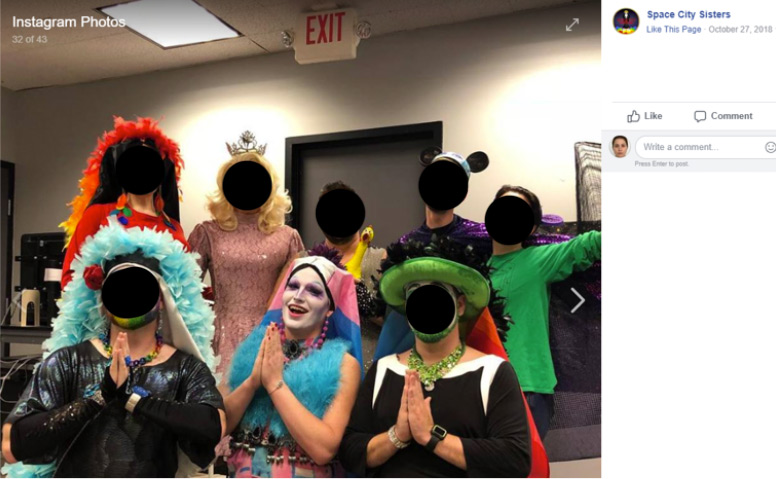 DQST with Sister Jeff in the front center. 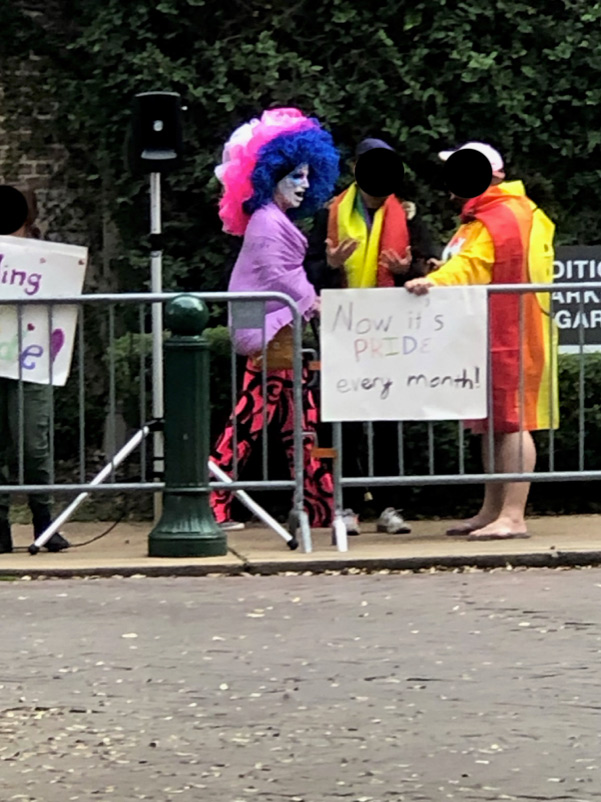 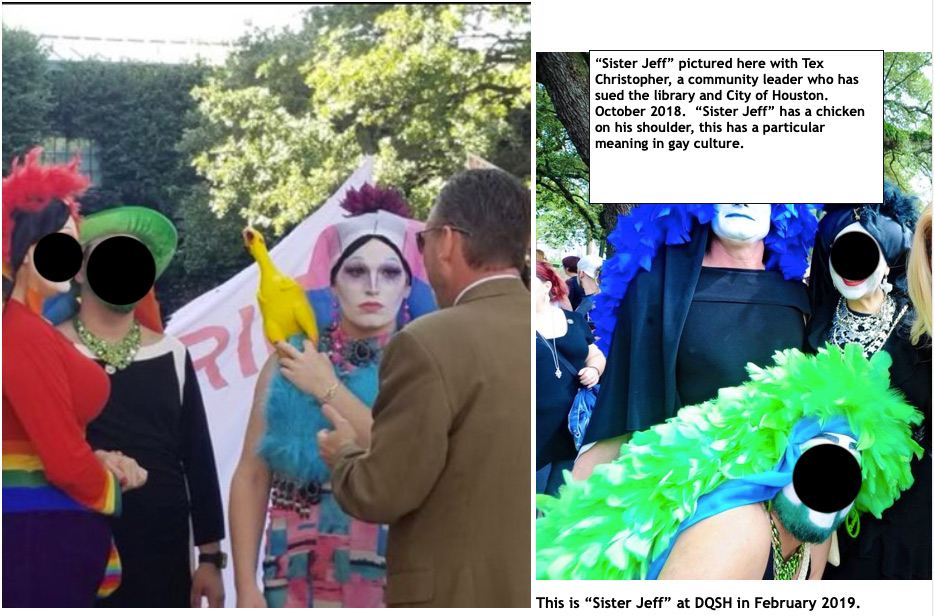 Liza Lott is also involved with HATCH Youth, a program for LGBTQ youth ages 6 and up:

It was on Liza Lott’s Instagram page that he posted information leading to the discovery of the legal name, William Travis Dees.

A combination of posts he shared of texts messages from his mother and a photo of prescriptions drugs he was prescribed for gender transition provided enough detail to verify his identity and run a background check. In one post, his mother calls him “William”.  We then looked at the family associated with the name William Travis Dees (which had been associated with data such as address and phone number for his alias Elizabeth Davidson) and found his picture posted in his family’s social media confirming for us that he was in fact the William Travis Dees. 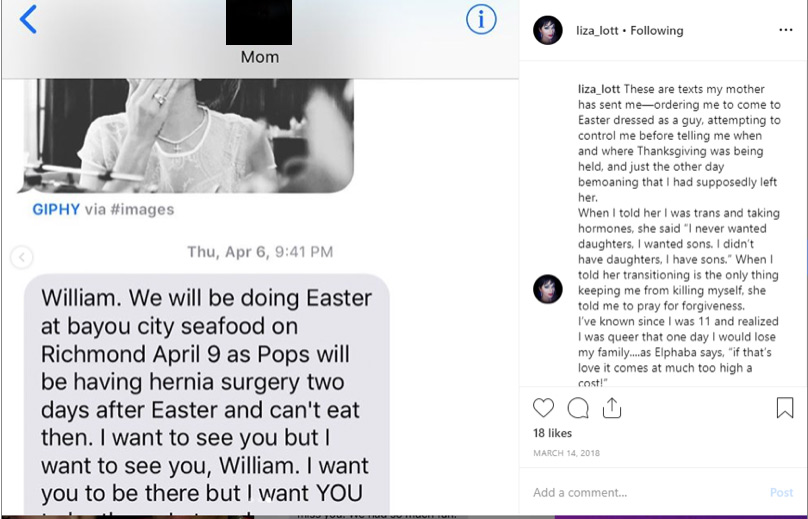 This is an address we were able to use to help connect dots to the drag queen’s real identity. 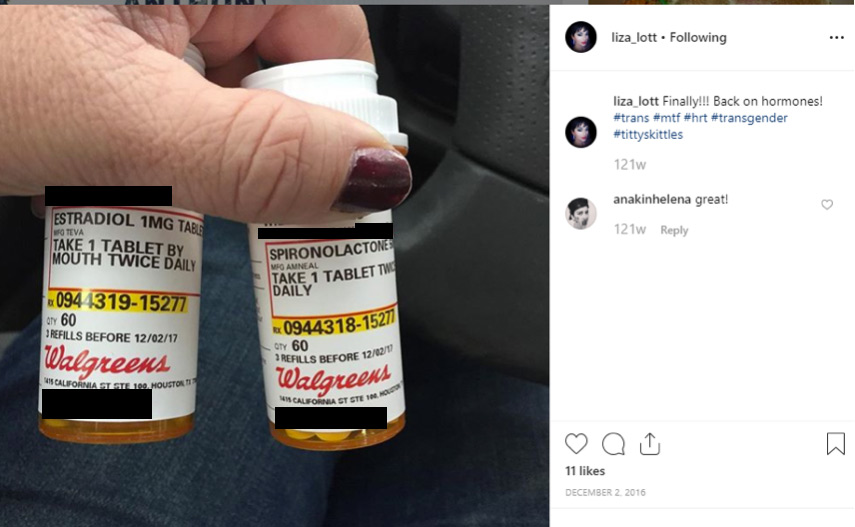 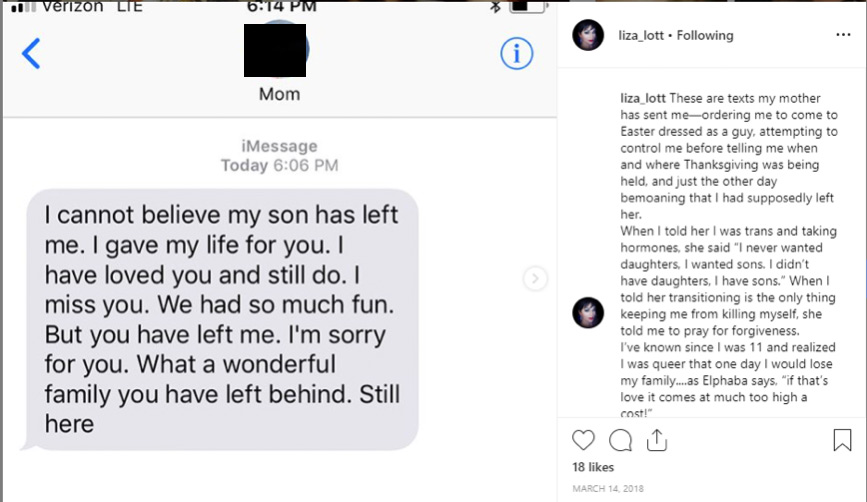 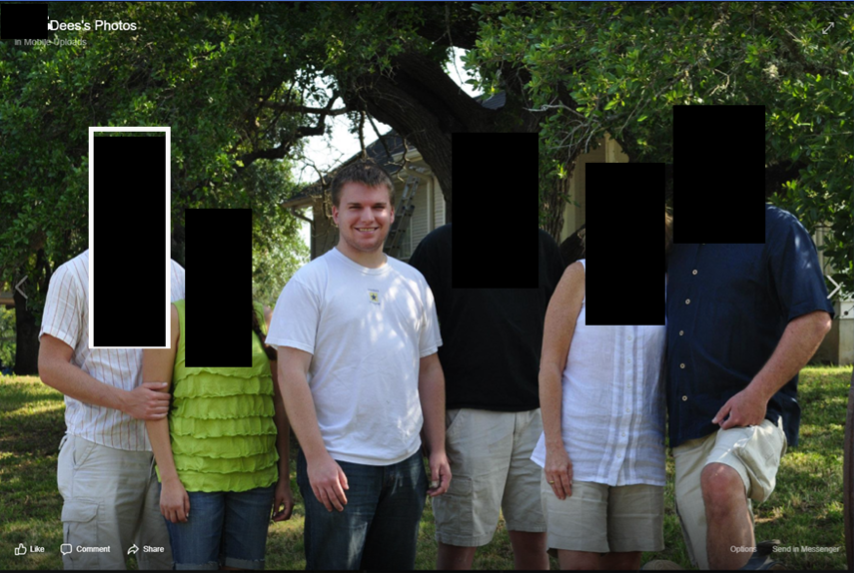 Here is his record:  https://www.bustedoffenders.com/texas/houston/sex-offenders/william-travis-dees/07361172 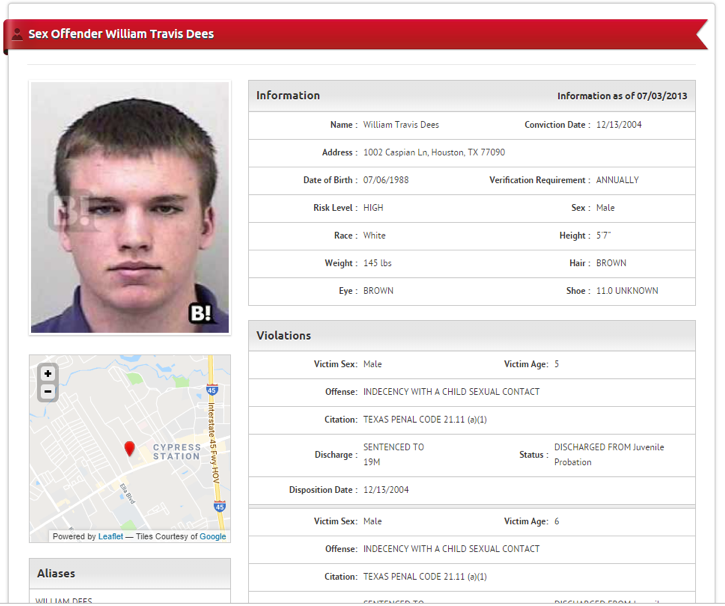 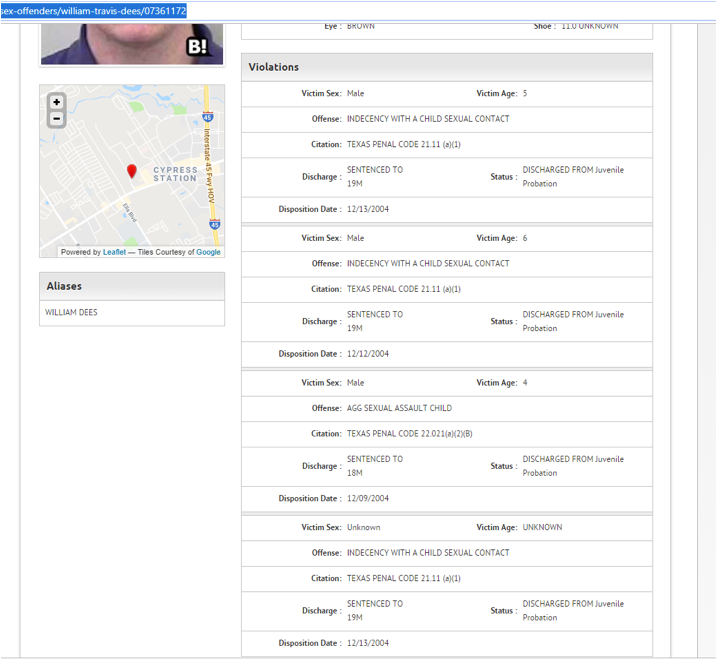 Sec. 21.11.  INDECENCY WITH A CHILD.  (a)  A person commits an offense if, with a child younger than 17 years of age, whether the child is of the same or opposite sex and regardless of whether the person knows the age of the child at the time of the offense, the person:

(2)  with intent to arouse or gratify the sexual desire of any person:

(b)  It is an affirmative defense to prosecution under this section that the actor:

(1)  was not more than three years older than the victim and of the opposite sex;

(2)  did not use duress, force, or a threat against the victim at the time of the offense;  and

(A)  was not required under Chapter 62, Code of Criminal Procedure, to register for life as a sex offender;  or

(B)  was not a person who under Chapter 62 had a reportable conviction or adjudication for an offense under this section.

(b-1)  It is an affirmative defense to prosecution under this section that the actor was the spouse of the child at the time of the offense.

(c)  In this section, “sexual contact” means the following acts, if committed with the intent to arouse or gratify the sexual desire of any person:

(1)  any touching by a person, including touching through clothing, of the anus, breast, or any part of the genitals of a child;  or

(A)  intentionally or knowingly:

(i)  causes the penetration of the anus or sexual organ of another person by any means, without that person’s consent;

(ii)  causes the penetration of the mouth of another person by the sexual organ of the actor, without that person’s consent; or

(B)  regardless of whether the person knows the age of the child at the time of the offense, intentionally or knowingly:

(i)  causes the penetration of the anus or sexual organ of a child by any means;

(ii)  causes the penetration of the mouth of a child by the sexual organ of the actor;

(iv)  causes the anus of a child to contact the mouth, anus, or sexual organ of another person, including the actor; or

(v)  causes the mouth of a child to contact the anus or sexual organ of another person, including the actor; and

(i)  causes serious bodily injury or attempts to cause the death of the victim or another person in the course of the same criminal episode;

(ii)  by acts or words places the victim in fear that any person will become the victim of an offense under Section 20A.02(a)(3), (4), (7), or (8) or that death, serious bodily injury, or kidnapping will be imminently inflicted on any person;

(iii)  by acts or words occurring in the presence of the victim threatens to cause any person to become the victim of an offense under Section 20A.02(a)(3), (4), (7), or (8) or to cause the death, serious bodily injury, or kidnapping of any person;

(iv)  uses or exhibits a deadly weapon in the course of the same criminal episode;

(v)  acts in concert with another who engages in conduct described by Subdivision (1) directed toward the same victim and occurring during the course of the same criminal episode; or

(vi)  with the intent of facilitating the commission of the offense, administers or provides to the victim of the offense any substance capable of impairing the victim’s ability to appraise the nature of the act or to resist the act;

(B)  the victim is younger than 14 years of age, regardless of whether the person knows the age of the victim at the time of the offense; or

(C)  the victim is an elderly individual or a disabled individual.

(3)  “Disabled individual” means a person older than 13 years of age who by reason of age or physical or mental disease, defect, or injury is substantially unable to protect the person’s self from harm or to provide food, shelter, or medical care for the person’s self.

(e)  An offense under this section is a felony of the first degree.

(f)  The minimum term of imprisonment for an offense under this section is increased to 25 years if:

This is the same ‘Sister Jeff” from Drag Queen Story Time that followed a woman into the women’s restroom, which appears to be a violation of another city ordinance: 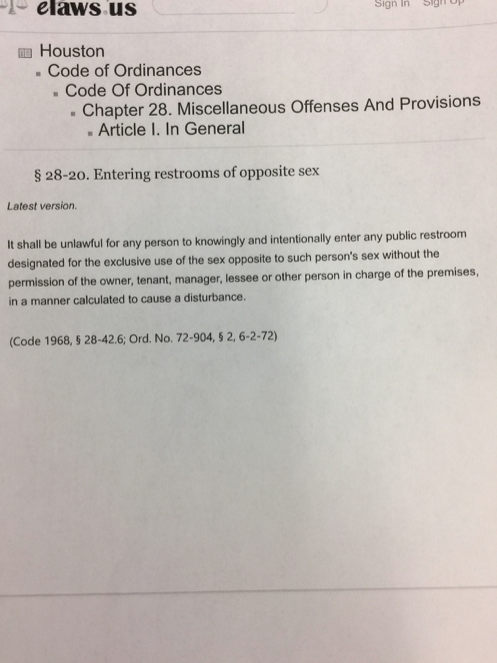 In this social media post (below), Liz Davidson, aka Liza Lott, aka Sister Jeff, aka William Dees, aka Elizabeth Davidson admits he was in the women’s restroom and makes himself out to be the victim in this scenario.  A drag queen who is transgender follows a woman who he most certainly recognized as one of the protesters into the public lady’s room at the library and he is claiming it was all innocent.

A complaint was made at the Freed Montrose Library to an officer on duty, no report has been made available yet. 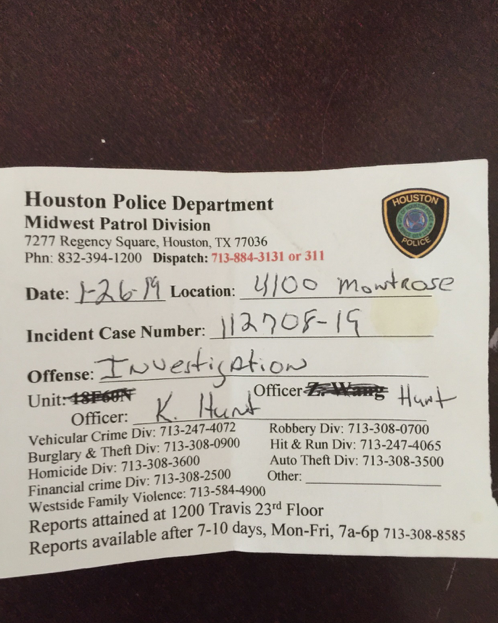 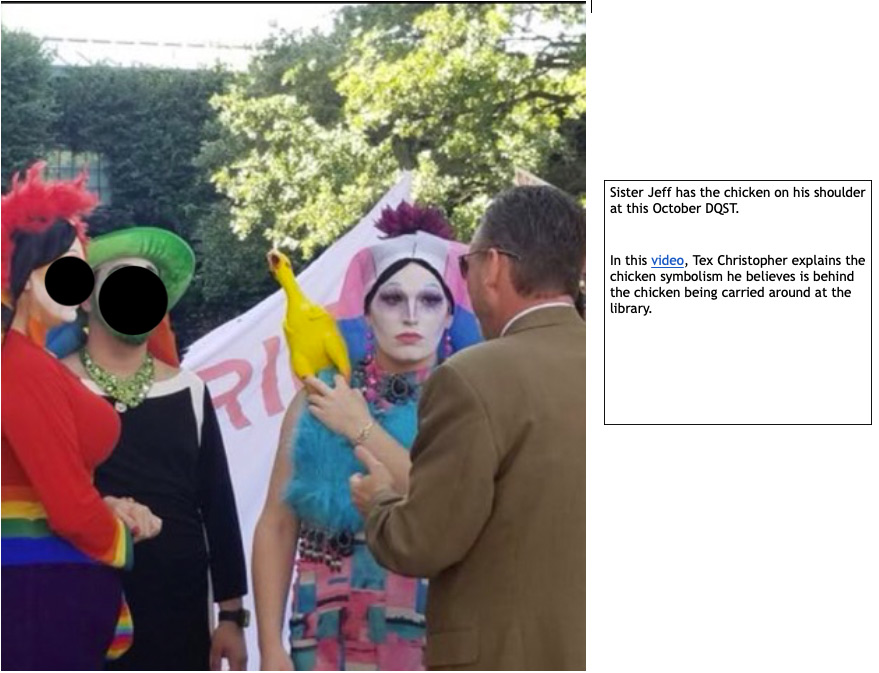 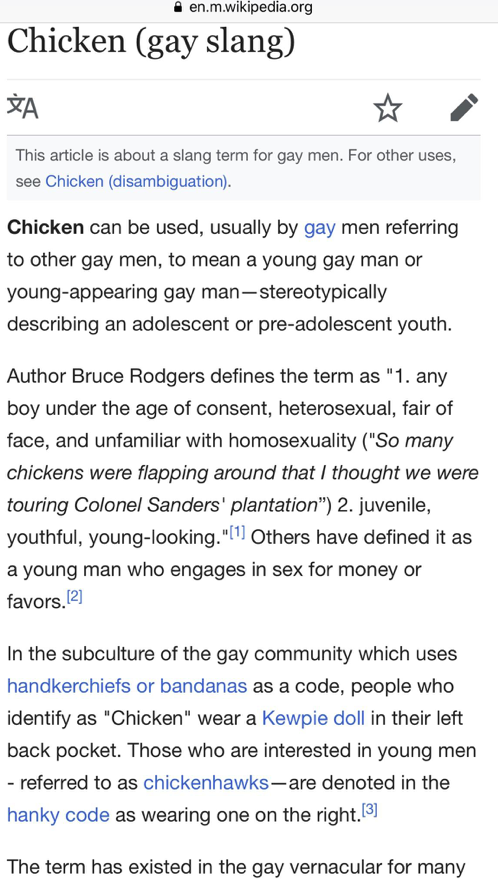 MassResistanceHouston members and Community Leader Tex Christopher have warned the Mayor and City Council for months about this program, the library has temporarily suspended the program but doubled-down and plans to bring it back this summer. The organizers reported that they gave a list of names to the library in October and all volunteers had background checks from that time on.  The library had said the previously identified sex offender was just an oversight due to the volunteer submitting a wrong name and no social security number on his application.

Below are screen shots of an application for a greeter to the library, the application does not indicate a field for inputting a social security number. It does inquire about online presence, this is something we brought to the council and the mayor’s attention in the past. None of these volunteers have social media that would be acceptable for a person being held up as a role model for children and the fact they use their stage names makes their social media easy to find.  Most parents would not approve of these volunteers as role models or to read or be involved in any children’s programs based on the social media presence alone.  Then there is the matter of the background checks that “don’t get performed” or are ignored, whichever it is.  If background checks were performed then why did the library not admit in March that there was more than one sex offender found in their background checks?  They invited this guy to be part of a welcoming committee to the children and this was for several consecutive months.  They had background checks since October 2018.  Another oversight?  The public deserves answers.

MassResistance Houston will demand answers from city leaders and the library officials who have withheld documents demanded released by the Texas Attorney General, Ken Paxton.  MassResistance Houston will demand an audit to be conducted on the background checking and volunteer applications to determine how many were not ever conducted and how many sex offenders have been involved in programming in the Houston Public Libraries and for which programs.  MassResistance will demand a new ordinance that protects children by requiring background checks for all city-sanctioned events that involve children.

MassResistance Houston made a video that demonstrates the attitudes that they faced when they went to city hall over the course of the last several months to raise concerns about Drag Queen Story Hour.  That video can be found here: https://www.youtube.com/watch?v=cKyJEJbkAaA

Screen shot of application to volunteer: 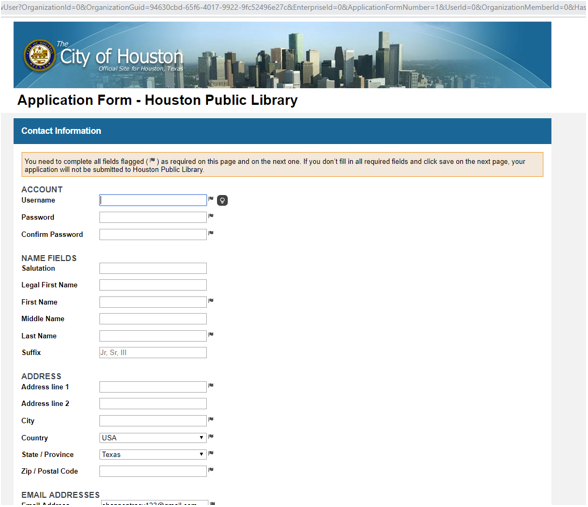 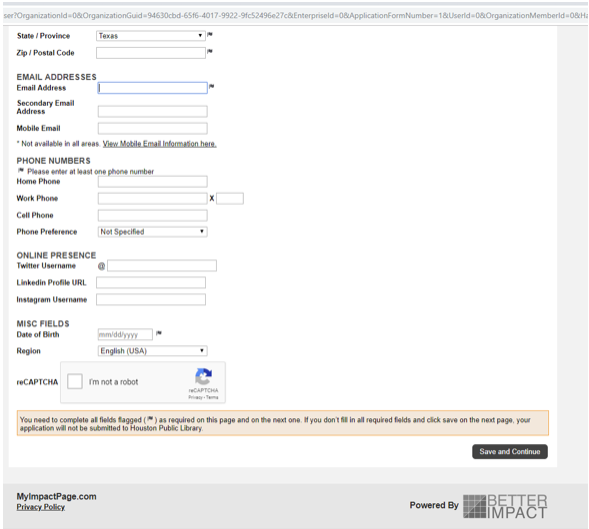 This is Space City Sisters, with Sister Jeff, some of the “sisters” are involved in pup play activities and contests. 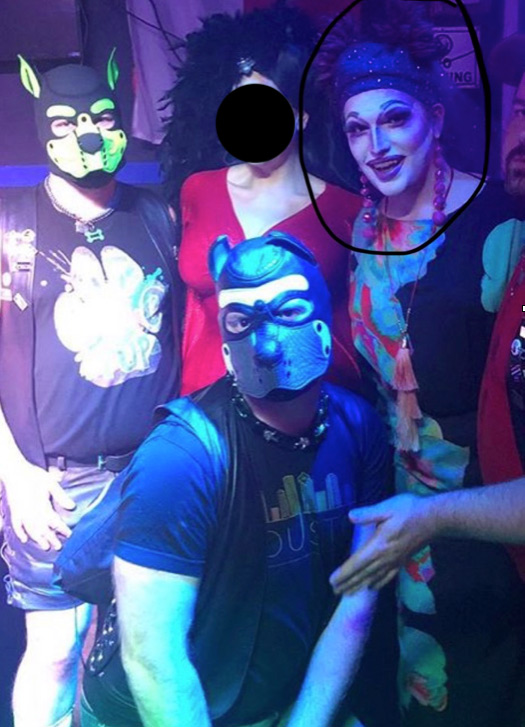 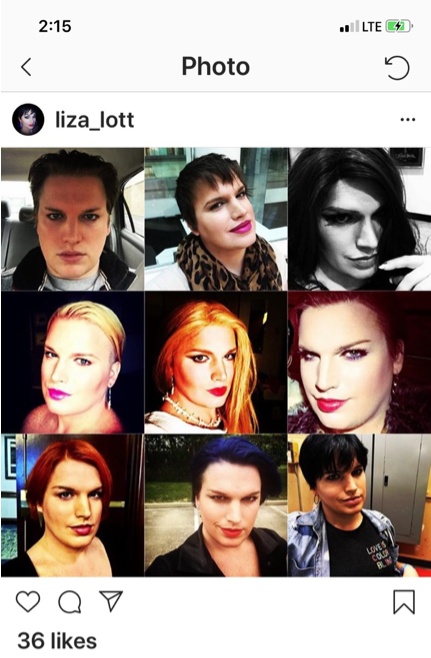 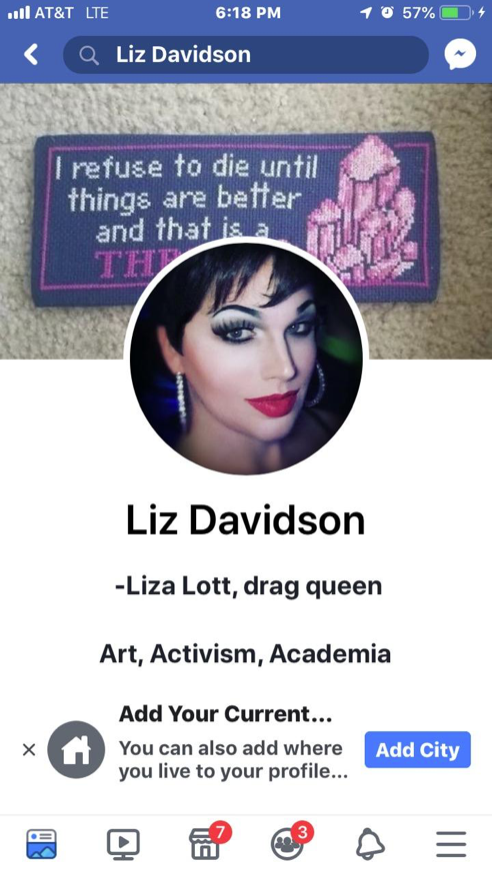