Nawaf Fares, former Syrian Ambassador to Iraq who just recently defected and is now harbored in Qatar, admitted in an interview with the London Telegraph that he personally organized “Jihadi units” to fight US troops in Iraq. Fares maintains that he did so under orders by the Syrian government, and that a recent string of bombings in Syria were carried out by “Al Qaeda” in coordination with Syrian security forces. 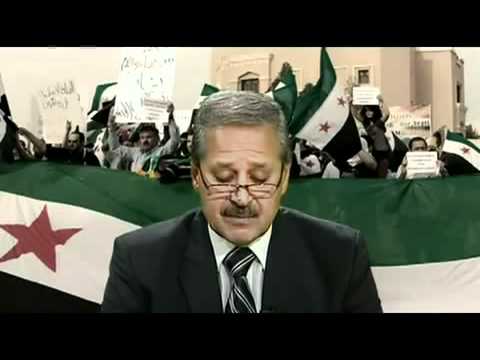 Image: Nawaf Fares, hailed a “hero” by the West for “defecting” from the Syrian government and joining the suspect “Syrian National Council,” has now admitted he was behind organizing “Jihadi units” that fought and killed US troops in Iraq. Undoubtedly these units he claims he created also killed British troops, as well as Iraqi fighters and civilians. His “hero” status is indicative of the dysfunction and morally depraved state of Western foreign policy.

Unfortunately for Nawaf Fares, who has just admitted to being an international terrorist, not only does he fail to provide any actual evidence to suggest the Syrian government had ordered or condoned his terrorist activities during the US occupation of Iraq (as even the Telegraph notes), nor provide any evidence at all that “Al Qaeda” had coordinated its bombing campaigns with Syrian security forces, but a myriad of confirmed reports and evidence already exist contradicting entirely Fares’ statements.

That President Bashar al-Assad is a “collaborator” with Al Qaeda is farcical at face value. The following headlines help illustrate the absurdity of Fares’ claims: “Al Qaeda head calls for fall of Assad” (AP), “Top US official: Al Qaeda in Iraq joining fight against Syria’s Assad” (McClatchy), “Al Qaeda’s Zawahiri calls for war to oust Syria’s Assad” (AP), just to name a few. Additionally it was reported by Seymour Hersh in a 2007 New Yorker article titled, “The Redirection,” that not only was Al Qaeda being arrayed against the Syrian government since as early as 2007, but it was in fact the United States, Israel, and the Gulf States that were organizing, funding, and arming them.

Casting further doubt on Fares’ claims, particularly regarding allegations that the Syrian government was behind bombings sweeping the country, Reuters in April 2012, ran an entire article covering the so-called Free Syrian Army (FSA) and their “tactical switch” to terrorist bombings in the face of superior military weapons and tactics employed by government security forces. Titled, “Outgunned Syria rebels make shift to bombs,” it states that Syrian extremists who had honed their skills fighting US and British troops in Iraq, had joined the ranks of the FSA militants to employ their bomb-making abilities against, not in collaboration with, the Syrian government.

“Some of these bombing skills may have been brought back from fighters who joined the Sunni insurgency in neighboring Iraq against the U.S. occupation forces. The presence of hardliners from a Syrian Sunni majority that feels oppressed by Assad and his fellow Alawites who dominate the administration has been among causes for concern among those who fear a sectarian civil war similar to that which devastated Iraq over the past decade.”

While even the Reuters article attempts to allay the fears of readers, suggesting that the anti-government militants would never attack civilian targets, reports from both Human Rights Watch (HRW) and the UN have documented cases where militants have committed sweeping atrocities specifically targeting civilians, including kidnapping for ransom, torture, and murder.

The HRW report titled, “Syria: Armed Opposition Groups Committing Abuses,” is broken into three parts, kidnapping, torture, and executions. And while the report attempts to focus mainly on atrocities carried out against security forces and government supporters, the mention of civilian victims is made as well.

In the face of such evidence, Reuters and Fares’ assurances that FSA terrorists are limiting their attacks only to military targets is wishful thinking at best, insulting deceit at worst, and illustrate a pattern of serial deceit used to manipulate the public’s perception to see in a positive light what is in reality a terrorist campaign.

Fares, a self-confessed terrorist who admits he organized death squads to fight and kill Americans and undoubtedly civilians in neighboring Iraq, has leveled a series of accusations with no evidence, to provide the maximum amount of demonization possible against Syrian President Bashar al-Assad.

He has left a “regime” he finds unbearable, which he claims without evidence was carrying out a terrorist bombing campaign against its own people, and who supported “Jihadi units” to fight its regional neighbors – to then join a militant organization that has demonstratively and admittedly carried out bombing campaigns against the Syrian people, consists of extremist mercenaries from abroad sent to destabilize and destroy his nation, and guilty, by HRW and the UN’s own admissions, of the same atrocities and horrors Fares has claimed he defected from the government over.

Nawaf Fares comes across as a exaggerating opportunist, so overly eager to play his role, that he has tripped over himself and found both feet lodged firmly in his mouth. While the London Telegraph seems not to have a problem sitting down and talking with a man who admits he organized death squads that killed US and British troops, perhaps because of the complicit role Telegraph’s propaganda played in sending those troops into harm’s way to begin with, it will be more difficult for the US and British governments to similarly ignore his hamhanded admissions, if only to maintain a semblance of consistency. Qatar also finds itself in a quandary harboring a self-confessed terrorist.

If the US and British governments refuse to acknowledge or act upon this, perhaps the armed forces will – finally taking insult to having shed blood and lives for over a decade fighting the “War on Terror” only to see their perceived enemies given five-star lodging in Qatar and airtime on the evening news.

And finally, it is the people of all nations who must recognize, expose, boycott, and replace the corporate-financier interests driving this destructive increasingly unhinged agenda who – interests that are ultimately responsible for the creation, cultivation, and harboring of individuals like Nawf Fares.