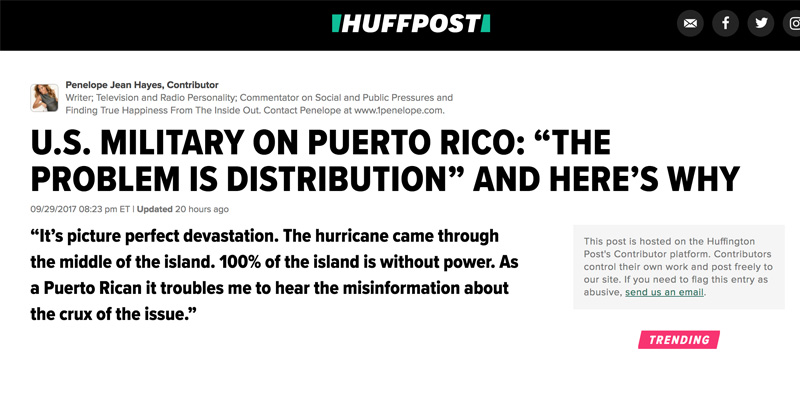 Democrats and Puerto Rican teamsters have orchestrated a stand-down of essential supply distribution throughout Puerto Rico in an effort to make President Trump appear ineffective at responding to the humanitarian crisis.

The Puerto Rico teamsters Union called “Frente Amplio,” a group of private contractors working for the federal government, are refusing to distribute key supplies throughout Puerto Rico because they’re seeking revenge over policies they view as hurtful to their industry set by the Puerto Rican governor.

But Democrats in the U.S. are keen to blame Trump for the distribution debacle, saying he’s not doing enough to help the people there.

Hard to believe but this could be worse than Charlottesville… Trump's racism is costing lives. #heisnotfit

Trump's racist neglect of Puerto Rico is threatening lives. It is time to start caring about the crisis there.

“It’s just not true,” said Col. Michael Valle, commander of the federal relief effort in Puerto Rico. “As a Puerto Rican, I can tell you that the problem has nothing to do with the U.S. military, FEMA, or the DoD.”

“The aid is getting to Puerto Rico. The problem is distribution. The federal government has sent us a lot of help; moving those supplies, in particular, fuel, is the issue right now.”

Valle says they have the water, food, generators, medicine, and fuel, but they’re not being moved across the country as quickly as needed, and there’s ships full of supplies that still need to unload at the ports which remain full.

“It’s the lack of drivers for the transport trucks, the 18 wheelers,” Valle said. “Supplies we have. Trucks we have.”

“As a Puerto Rican, what happens here for the people is personal to me,” Valle said. “To say that we are not provided all of the help and resources needed is just not true. Distribution is the key, and we are working day and night on it.”

Democrats have not only seized the opportunity to blame Trump, but appear to have been preparing for it as well, evidenced by last night’s polished Saturday Night Live sketches hammering Trump on Puerto Rico from beginning to end.

This suggests that the stand-down was orchestrated by anti-Trump forces using disgruntled Puerto Rican truck drivers as tools of obstruction to hinder Trump’s efforts to deliver aid and supplies to the storm-ravaged country.