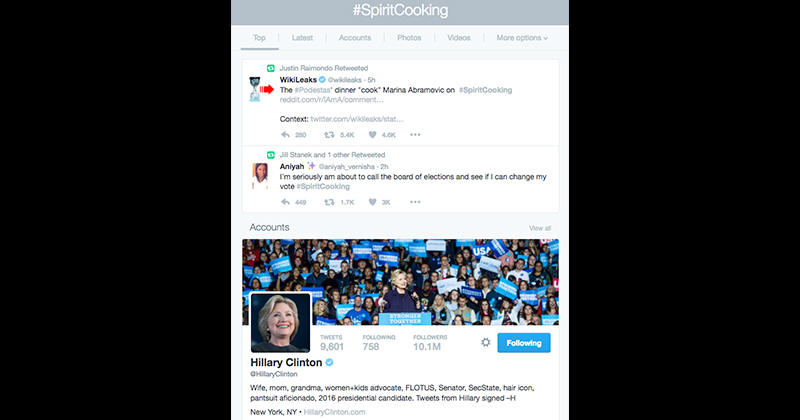 Hillary Clinton’s ties to satanic rituals and the occult have been well-documented for decades.

And a source claimed many FBI agents consider Clinton to be “the Antichrist personified.”

The Clinton Satanic network has now been exposed on a national level thanks to WikiLeaks.

Here are some examples of what a “spirit cooking” dinner with Marina Abramovic looks like:

Can't wait to go #SpiritCooking with @HillaryClinton and @JohnPodesta again!

Another email from WikiLeaks even shows Abramovic being invited to Hillary Clinton’s campaign launch party.

The Drudge Report linked this article at the top of the site propelling the hashtag #SpiritCooking to the top of Twitter’s trending hashtag section.

The internet exploded this morning after the news broke. 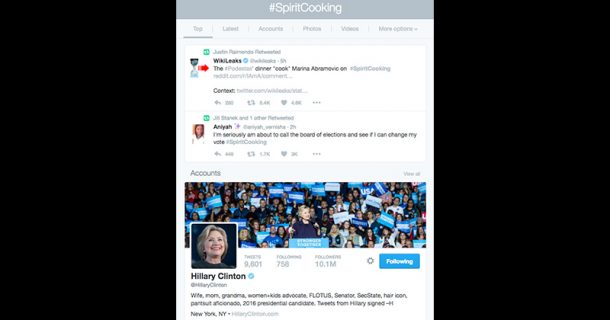 The Elites are Satanists. Ppl have been called conspiracy theorists for DECADES & it's true. Jay Z w/ Maria Abramovic herself #SpiritCooking pic.twitter.com/Dn70eD5daS

It's perfectly normal that this woman is close friends with Hillary campaign leaders. #SpiritCooking pic.twitter.com/uC4agv7kz1

Alex Jones has been proven right about the Clinton’s connections to Satanism:


During the RNC in Cleveland, Republican presidential candidate Dr. Ben Carson called out Clinton on her luciferian ties.

Similarly, an article from CNN in 1996 discusses Hillary’s affiliation with dark magic.

More information on that article can be found here.

Bill Clinton’s book My Life: The Early Years describes their trips to Haiti where they participated in “voodoo rituals.”

So far, all these revelations has hurt the Clinton campaign and Hillary is already losing voters.

I just recently switched to Trump, & glad I did
Won't have none of that devil worship in my white house#SpiritCooking pic.twitter.com/SXOGjA7fUy

Also, check out occult expert Mark Dice’s latest videos on the subject since the news broke: