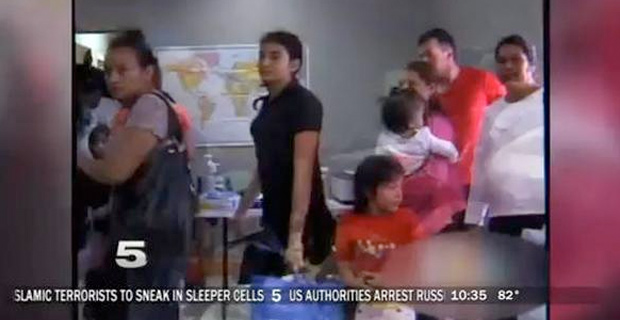 The mayor of a Texas border town has announced his city will not be diverting public funds to further aid the illegal immigrant invasion, a problem which is straining the resources of other border towns.

Laredo, Texas, Mayor Raul Salinas says there is simply no feasible way for his town to cover the expenses associated with sheltering and providing for the immigrant influx passing right through his town.

For immigrants, Laredo is a pit stop where they can secure food, water and clothes on their journeys deeper inside the interior.

One such organization in El Paso, for example, has had to locate housing and purchase bus and plane tickets for some 1,500 Central American immigrants. But Salinas says those funds and donations don’t last forever.

“What’s going to happen when the faith organizations run out of money? The burden will be on cities,” Salinas said. The border city of McAllen, Texas, spent more than $70,000 in June providing for immigrants.

Short of raising taxes on his town’s residents, which he states he is not willing to do, Mayor Salinas says he will not dig into the city’s coffers for a problem needing to be addressed at the federal level.

“We’re strapped. We cannot put the local taxpayers in strain,” Salinas said. “We’re not going to raise taxes. If we use some tax money, and we’re tight for money now, are we going to get reimbursed? That’s the challenge that we face,” Salinas said.

President Obama today announced he would seek nearly $4 billion in taxpayer money from Congress to address the border issue. The official disbursement of funds includes additional funding for deterrence, enforcement and international campaigns aimed at discouraging illegal immigrants from embarking on the perilous expedition to the United States.

However, as Mayor Salinas suspected, nowhere in the budget does it allow for the fiscal reimbursement of towns which have weathered the financial brunt of the orchestrated crisis.

Salinas says he’s planning on meeting with other border mayors to “to create a united front and send a message to politicians in Washington that money is desperately needed in the region,” reports KRGV.

It should be noted Mayor Salinas, a democrat, is co-chair for the U.S. Conference of Mayors’ Comprehensive Immigration Reform Task Force, which “believes that reform is urgently needed and must be comprehensive along with stronger boarder [sic] security.”