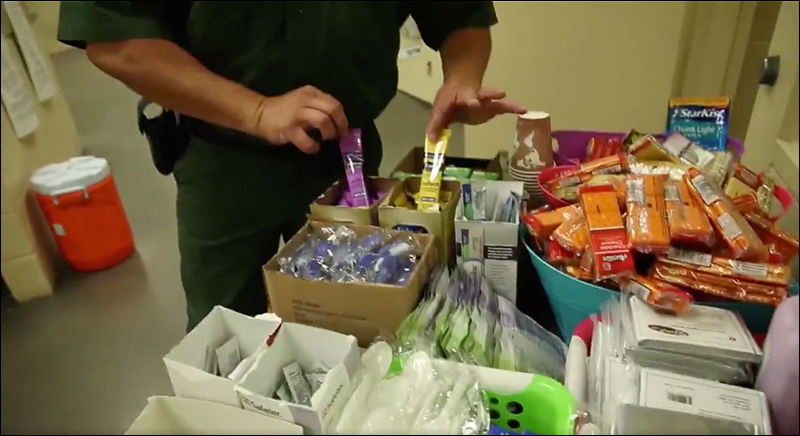 A border patrol agent has debunked myths about the mistreatment of illegal aliens in detention centers, even drinking “toilet water” to prove his point.

No, he didn’t drink right from the toilet, like Congresswoman Alexandria Ocasio-Cortez (D-NY) alleged illegals were doing, but from the attached sink unit that provides clean, drinkable water common in the facilities.

Here is a look at the inside of a #BorderPatrol processing center with Chief Patrol Agent of #TucsonSector Roy Villareal @CBP pic.twitter.com/vu1dyV72Uz

In a video from US Customs and Border Patrol Wednesday, Tucson sector chief agent Roy Villareal gives viewers an inside look at one of the detention facilities housing illegal immigrants, showing the public that Democrats have been fabricating and exaggerating conditions at the overcrowded centers.

Villareal shows a stockpile of clothing for women and children, feminine hygiene products and a supply cart filled with baby formula, mylar blankets and various snacks.

The agent also highlights a packaged toothbrush pre-loaded with toothpaste, which Ocasio-Cortez claimed children were being denied.

Now I’m on my way to Clint, where the Trump admin was denying children toothpaste and soap.

This has been horrifying so far. It is hard to understate the enormity of the problem. We’re talking systemic cruelty w/ a dehumanizing culture that treats them like animals.

“There’s a lot of misinformation that we’re not allowing people to brush their teeth,” Villareal says. “This is a toothbrush that is pre-loaded with toothpaste and it’s provided to everyone and readily available so if they want more than one.”

Next, the agent heads to a toilet where he debunks one of AOC’s biggest lies, in which she claimed people were literally “drinking out of toilets.”

Now I’ve seen the inside of these facilities.

It’s not just the kids. It’s everyone. People drinking out of toilets, officers laughing in front of members Congress.

I brought it up to their superiors. They said “officers are under stress & act out sometimes.” No accountability.

“Now I’ve seen the inside of these facilities,” Cortez wrote Monday. “It’s not just the kids. It’s everyone. People drinking out of toilets, officers laughing in front of members Congress.”

The agent explains, “This is a combination toilet sink and the sink provides fresh water,” as he pours himself a cup.

“The wall is marked ‘agua potable’ which is potable water there’s nothing wrong with this water,” he says and takes a drink. “We’re not forcing aliens to drink out of the toilet.”

The agent finishes by wishing everyone a happy Fourth.

“Ladies and gentlemen, as the men and women of the Border Patrol continue to safeguard our nation, I hope you have a wonderful Fourth of July.”

In reality there is an issue with overcrowding at CBP facilities, especially in Texas and San Diego, but as Democrats refuse to compromise with President Trump on a comprehensive border defense strategy, they themselves appear to be perpetuating the problem for which they’re seeking the solution.

Mexico is doing a far better job than the Democrats on the Border. Thank you Mexico!