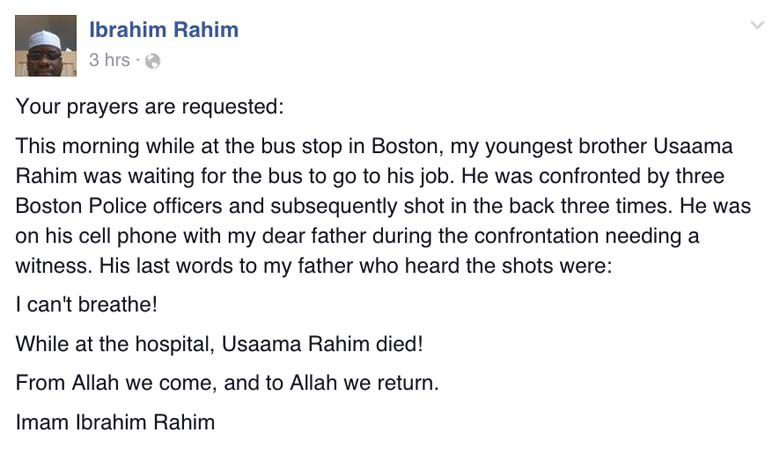 A Boston police officer and an FBI agent shot and killed a knife-wielding man today in what investigators are calling a possible ISIS-inspired terror event.

According to reports, Roslindale-resident Usaama Rahim, 26, was under 24-hour surveillance by an FBI joint terrorism task force for several weeks. They decided to confront him this morning around 7am near a CVS store.

Boston Police commissioner Bill Evans told reporters Boston police and the FBI were watching the man around 7 a.m. near the CVS in the Stony Brook Plaza on Washington Street when they confronted him to speak with him.

Evans said law enforcement officials did not have their guns drawn when they approached Rahim.

At that point, Evans said, Rahim pulled out a “military-style knife,” and officers believed their lives were in danger.

“We believed he was a threat,” Commissioner Evans said. “He was someone we were watching for quite a time. The level of alarm brought us to question him today. I don’t think anybody expected the reaction we got out of him.”

“Our officers tried their best to get him to put down the knife. Unfortunately, they had to take a life.”

Here's the knife that Usaama Rahim had when approached by @bostonpolice. pic.twitter.com/AfuaNVGv48

Police say they shot Rahim twice, once in the torso and once in the abdomen, according to the Boston Globe.

Without disclosing details of the matter, investigators searched an apartment in Roslindale, as well as a home in Warwick, Rhode Island.

“I can tell you that our investigation is still ongoing. There’s a lot more for us to do,” Boston FBI head Vincent Lisi said. “I don’t think there’s any concern for public safety right now.”

Sources: Usaama Rahim was allegedly radicalized by #ISIS social media & may have been planning to attack police. #7News

In a Facebook post shortly following the shooting, Ibrahim, a popular imam in Boston, said his brother was approached and shot in the back three times by police while on his way to work.

Ibrahim says his brother was on the phone with their father “needing a witness” during the confrontation.

“His last words to my father who heard the shots were: I can’t breathe!” Ibrahim wrote.

Pray4 my younger brother Usaama Rahim shot 3 X in his back by Boston Police then dying His last words I can't breathe pic.twitter.com/XcZWeiigtg

An acquaintance who had met Rahim and his wife at the Islamic Society of Boston told the Globe from what she’d seen she thought they were “good people.”

“He and his wife, they are good people. They definitely kept to themselves,” the woman, who preferred not to be identified, stated. “There is nothing that I can think [of] that warrants him being investigated or followed at 7 o’clock in the morning.”

In the aftermath of the shooting, Linda Sarsour, executive director at the Arab American Association of New York, posed several unanswered questions, specifically wanting to know the extent of the FBI’s surveillance into Rahim, among other things.

The last question I ask is because of how early this was. Did he go somewhere for Fajr? Did they surveil a place of worship?

The CVS:
1) what prompted them to go to the CVS, 2) was there a reported threat, 3) what law enforcement agencies made up the JTTF (Join Terrorism Task Force), 4) which agency is in charge on site – as in, whose operation is this, 5) who attempted to “speak” with him, locals, Feds, or both.

The actual shooting:
According to the family, he was shot 3 times in the back while on a bus stop going to work. He was on the phone with his father who heard the shots. Last words from Usaama were “I can’t breathe.”

1) Law enforcement says he was brandishing a military knife and came towards them. If its true that he was shot in the back, then this makes no sense.

2) If he was on the phone with his father, was it handheld, headset? Were his hands even free?

3) Is this common counter-terrorism practice? You just stroll up to someone on a bus stop or in front of a CVS to question him? That’s what law enforcement is saying they did.

MANY UNANSWERED QUESTIONS, and like all those we demand justice for – this family demands answers. ‪#‎Justice4Usaama‬

It should be noted every single FBI officer-involved shooting since 1993, about 150 of them, has been “deemed justified.” The agency has also been known to stage and foil its own terror plots.