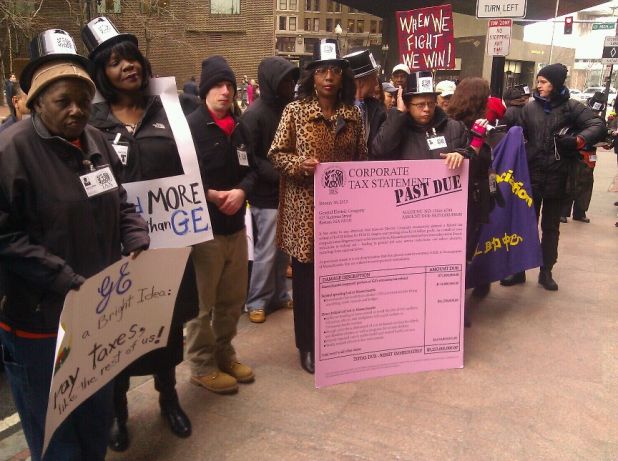 Everyone who met in Dewey Square this afternoon had one thing in common – whether they’re an activist with MassUniting, a member of Occupy Boston, or one of the police officers assigned to chaperone today’s protest. They all paid a lot more taxes than General Electric last year.

And so the group of roughly 100 pissed off people poured across Atlantic Avenue, and marched one block from Dewey to GE’s Boston offices on Summer Street. Their message was simple: “Pay your fucking taxes!” They even brought an invoice for the company.

While picketers gathered outside of GE, an undercover team of six operatives – already positioned inside the building – made their way up to the executive offices. As was expected, representatives refused to speak with them – that despite MassUniting’s clear argument and Mr. Monopoly tax collector top hats.

This all comes at a ripe time. MassUniting planned this and other actions against corporate tax dodgers around tax season. But it’s also an interesting discussion point as Republican presidential candidates continue to talk about things like “values” and “responsibility.”

Watching the worker rats walk by today’s protest in their black pea coats – shaking their heads at activists, snapping cell phone pics like they’re at a zoo – I got to wondering if it’s okay with them that GE received more than $3 billion in tax refunds for Fiscal Year 2010.

These aren’t conspiracy theories. GE employs several former U.S. Treasury officials. They lobby relentlessly for tax breaks. And unlike everyone from unemployment beneficiaries to Wesley Snipes, they’re exempt from paying a dime. This should outrage everyone.

With that said, the dirty work of blowing whistles on these kinds of thieves is left to a handful of outspoken gadflies, who today came from groups including the Chinese Progressive Association (CPA) and the Service Employees International Union (SEIU).

Through some SEIU delegates, I met Rafael Tavares, who worked for 11 years – through a third-party contractor – cleaning the GE factory in Lynn. He says that after making $8 an hour there without a single raise ever, and without vacation time or benefits, he was fired for taking a few personal days.

Unfortunately, Tavares and his other buddies from the Lynn plant represent just one of many ways that GE games the system. Truth is, there are countless people whose lives are worse off because of their practices. And unlike GE, they’ll all have to pay taxes this year.