A Child Protective Services supervisor was arrested this past week after police found an 11-year-old boy shivering and handcuffed to the front porch of her home with a dead chicken tied around his neck.

While responding to a call in the area, a Union County, North Carolina sheriff’s deputy says he took the initiative to investigate what appeared to be a child cuffed to the porch of a run-down home.

The approaching officer was confronted Friday morning by foster parent and emergency room nurse Dorian Lee Harper, 57, who offered no explanation as to why the boy was handcuffed at the ankles, nor why the dead chicken.

Police arrested Harper, and proceeded inside the home where they encountered extreme living conditions unfit for wildlife, let alone a family.

“It was filthy, feces on the floor, holes in the wall,” said Union County Sheriff Eddie Cathey describing the house’s substandard sanitation to local news crews. “The bathroom, you could see from outside of the hall into the bathroom. Sink was trashed. No running water.”

The outside of the home was littered with trash, old bicycles and rusty, broken appliances, basically looking like a scene out of Hoarders, and smelled like urine and feces, according to CNN’s Nick Valencia, but it was arguably in better condition than the home itself, says Sheriff Cathey. “As bad as you think that house was on the outside, that’s probably the cleanest part of that place.”

Four other foster children found living at the property, ages 8, 9, 13 and 14, were all deemed malnourished, and placed in protective custody. Police also had to feed several animals roaming the yard, including a horse and two llamas penned up behind the home.

Sheriff Cathey said all five children slept in the same room on blankets laid out on the floor, and that the 11-year-old boy was kept handcuffed to a 3-foot piece of railroad to keep him from running away.

Additional foster parent Wanda Sue Larson, 57, a supervisor with the Union County Department of Social Services, was not home when Harper was arrested, but did reportedly get charged later that day with child abuse inflicting serious injury and false imprisonment, as well as animal cruelty. Larson was also charged with willful failure to discharge her duty as a public official.

Neighbors were surprised to learn of Harper and Larson’s squalid living conditions, and said they’d only seen children one time last summer when one came running to their home asking for something to eat.

Harper and Larson are both currently jailed on a more than $1 million bond and were due in court today. 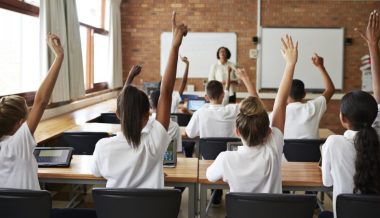