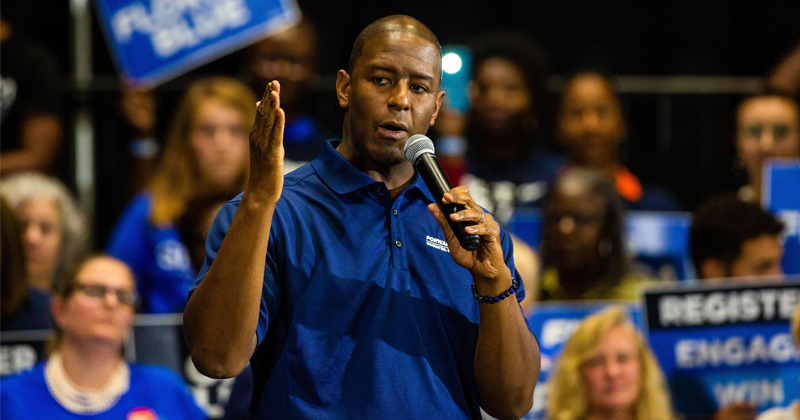 Former Democratic candidate for Florida Governor Andrew Gillum was discovered in a hotel room with two other men in a suspected crystal meth incident at a Miami hotel early Friday morning, according to authorities.

Miami Beach Fire Rescue crews were called to a hotel on Miami Beach around 1 am regarding a suspected drug overdose.

Upon arriving, they found Gillum, 40, with two other men.

“According to the [police] report, one of the men, Aldo Mejias, 56, told officers that he gave Travis Dyson, 30, his credit card information to rent a hotel room for the night,” reports Miami’s Local 10 news. “Police said Dyson rented the room around 4 pm Thursday and Mejias arrived at the room later that night, at which time he found Dyson and Gillum inside the hotel room, appearing to be under the influence of an unknown substance.”

“According to the police report, officers who responded to the hotel tried to speak with Gillum but he was too inebriated.”

Alleged images of the police report have surfaced online that mention “clear plastic baggies containing suspected crystal meth” being found in the room and describe Gillum as an “involved other” who, after being confirmed to be in stable condition, was allowed to leave the hotel room and return to his residence “without incident.”


Here is the last page of the report which sites the crystal meth.

As of this writing, it’s unclear if any of the suspects involved will face drug-related charges.

Powerful Bowne report breaking down the latest on the coronavirus outbreak.