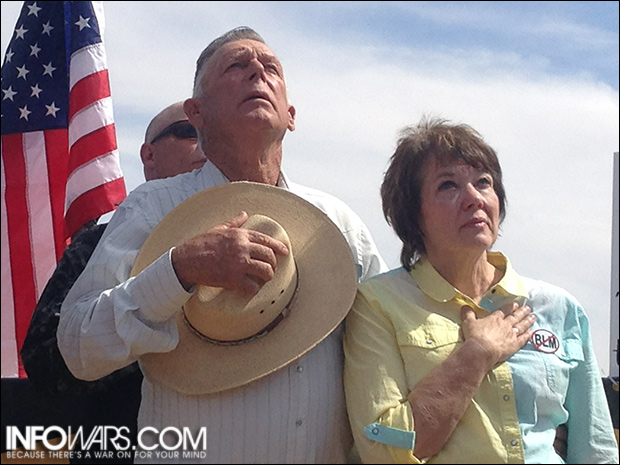 BREAKING: BLM backs down in #BundyRanch per Clark County Sheriff

A day after Infowars blew the lid off Sen. Harry Reid’s link to the BLM’s land grab of the Bundy Ranch, the Sheriff of Clark County, Nevada, Douglas Gillespie, announced to tremendous applause that the Bureau of Land Management would cease their efforts targeting cattle rancher Cliven Bundy.

In an emotional response, Bundy told the Sheriff he had one hour to disarm the federal agency, to bring the arms to the platform where speeches were made this morning, and to take down their barricades.

Last Saturday, the BLM, with the aid of helicopters, low-flying aircraft and hired cowboys, began rounding up Bundy’s cattle, and forbade him from interfering with the operation, as Bundy announced he was prepared to weather a full-on assault.

The sheriff read aloud a press release put out by the BLM today stating that they would back off due to “serious concern about the safety of employees and members of the public.”

From the director of the BLM, Neil Kornze:

“As we have said from the beginning of the gather to remove illegal cattle from federal land consistent with court orders, a safe and peaceful operation is our number one priority. After one week, we have made progress in enforcing two recent court orders to remove the trespass cattle from public lands that belong to all Americans.

“Based on information about conditions on the ground, and in consultation with law enforcement, we have made a decision to conclude the cattle gather because of our serious concern about the safety of employees and members of the public.

“We ask that all parties in the area remain peaceful and law-abiding as the Bureau of Land Management and National Park Service work to end the operation in an orderly manner.

Ranching has always been an important part of our nation’s heritage and continues throughout the West on public lands that belong to all Americans. This is a matter of fairness and equity, and we remain disappointed that Cliven Bundy continues to not comply with the same laws that 16,000 public lands ranchers do every year. After 20 years and multiple court orders to remove the trespass cattle, Mr. Bundy owes the American taxpayers in excess of $1 million. The BLM will continue to work to resolve the matter administratively and judicially.”

The BLM did not mention giving Bundy his cattle back, but he hadn’t asked for them, he asked for his freedom back and for the BLM to lay down their arms.

Check out our LIVE streaming coverage below.