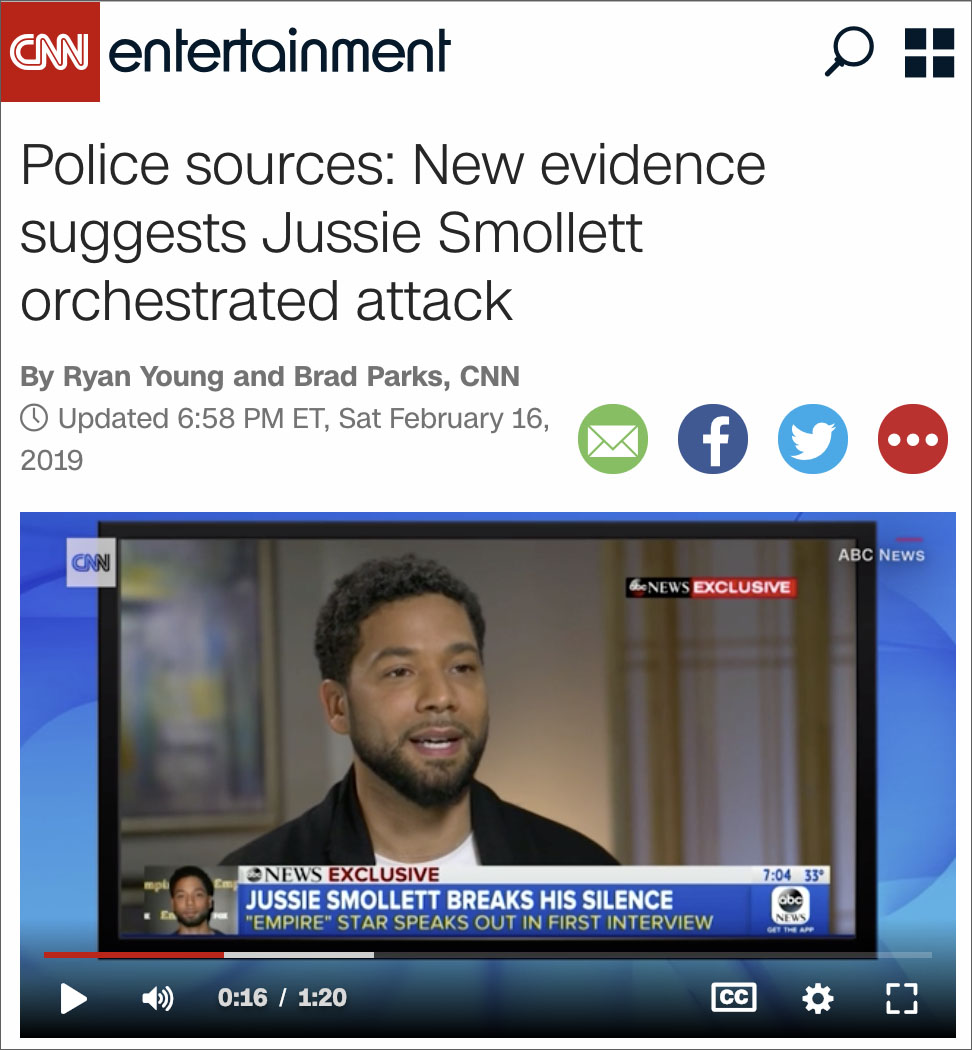 Investigators believe actor Jussie Smollett paid two men to orchestrate the alleged racist assault against him he claimed was perpetrated by white Trump supporters, according to police sources.

Chicago Police said that two Nigerian brothers questioned for their connection to Smollett through the show “Empire” confirmed they were the two suspects in the video surveillance footage Smollett claimed were the pro-Trump assailants.

“Yes, they are confirmed to be the men on scene by surveillance video,” Chicago Police said in a statement to ABC7 Chicago. “The reason why they were there is now central to the investigation and we can’t get into that at this time.”

“The brothers, who were arrested Wednesday, were released without charges Friday after Chicago police cited the discovery of ‘new evidence.’ The sources told CNN that the two men are now cooperating fully with law enforcement.”

“Smollett told authorities he was attacked early January 29 by two men who were ‘yelling out racial and homophobic slurs.’ He said one attacker put a rope around his neck and poured an unknown chemical substance on him.”

“The sources told CNN that there are records that show the two brothers purchased the rope found around Smollett’s neck at an Ace Hardware store in Chicago.”

Additionally, Chicago Police said they were “eager” to speak to Smollett in light of new evidence provided by the brothers.

“We have been in touch with Smollett’s attorneys. We contacted his attorneys last night after interrogation for a meeting. We made our intentions clear,” said Chicago police spokesman Anthony Guglielmi.

In an interview on “Good Morning America” earlier this week, Smollett expressed his frustration with being doubted when additional details began to poke holes in his allegations.

“It feels like if I had said it was a Muslim or a Mexican or someone black I feel like the doubters would have supported me a lot much more,” Smollett said. “And that says a lot about the place where we are as a country right now.”

Smollett hired Michael Cohen’s lawyer Thursday as public opinion began to turn against him, but it remains to be seen in what capacity he’d be represented.

The case surrounding the alleged attack by MAGA hat wearing Trump supporters is beginning to unravel at light speed as even the police now believe he may have staged it. Alex breaks down how asking questions should always be allowed when events like this occur.