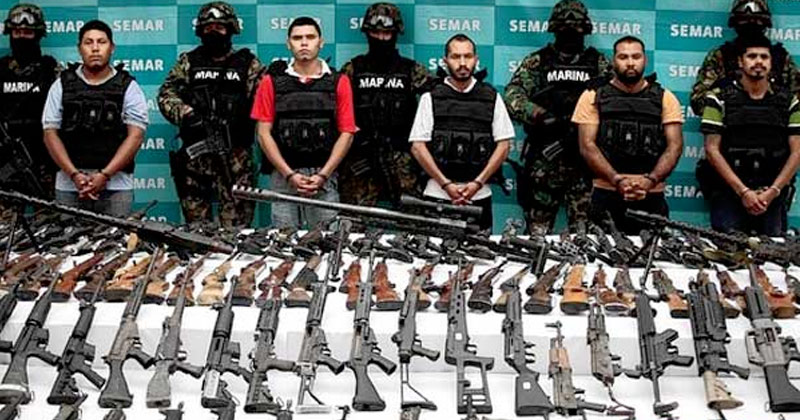 An expert researcher investigating the ATF’s Operation Fast and Furious gun walking scandal has discovered the operation is ongoing and is likely serving as a conduit for a global gun ring.

“Not only is it guns and rifles, but also grenades, grenade launchers, military grade night vision goggles, black special forces tactical uniforms,” Smith-Meck stated, adding that the number of military items relinquished is “more in the magnitude of 4,700.”

Smith-Meck asserts weapons transfers into Mexico are ongoing to this day, and his research suggests the weapons may be resold to broader international networks outside the country.

“What I would speculate is – dovetailing on what Tosh Plumlee has been on your program before and talked about – this is, I think, part of a much larger international gun running operation,” Smith-Meck said.

Explaining the nexus between Fast and Furious and the Middle East, Smith-Meck claimed Mexican traffickers were already on record meeting with foreign purchasers in 2010, and weapons linked to the operation later showed up in Morocco.

“We know from accounts from folks that are actually involved in running these weapons, in September of 2010, weapons – separate from what we would call Fast and Furious – were run down to Mexico, down to a town in Mexico, Caborca actually, met with a international middle eastern arms dealer and en route over to the Middle East,” the retired US Marine said Tuesday.

“And I think of great import, is a Moroccon DST commander – their DST is their internal security forces on 16 October 2010, reported to his supervisors that Fast and Furious weapons were in the kingdom of Morocco en route to arm the rebels in Algeria.”

Smith-Meck was also informed that military equipment and installations were utilized during the operation.

“I was approached by a Col. Taylor – told me he was from OSI, Office of Special Investigations and that the military was aware of possible military installation and equipment involvement with Fast and Furious,” Smith-Meck stated.

According to his sources, Smith-Meck predicts yet another arms transfer to Mexico will occur towards the middle of May.

“We’ve got a mid-May of this year time frame where another large shipment is scheduled to go across from basically Arizona into Mexico, and we’re trying to make sure that does not occur,” Smith-Meck said, adding he had forwarded the information on to Rep. Trey Gowdy.

Additionally, Lt. Smith-Meck, who suspects Agent Terry may have been murdered for digging too deep into Fast and Furious, says he himself has been targeted for harassment.

The investigator says he filed a police report after a March 22, 2015 incident in which someone approached him around 10pm while he was walking his dogs, knocked him down, kicked him in his lower back and told him, “You obviously aren’t getting the message. Keep your Fing mouth shut.”

Smith-Meck declares he will continue searching for the truth behind Brian Terry’s death and is asking for Congress’ help to find answers.

• Agents with the Bureau of Alcohol, Tobacco, Firearms and Explosives from 2006 through 2010 convince straw dealers to sell weapons to suspected arms traffickers who may in turn sell them over to Mexican cartels, ostensibly to track the cartels.

• On December 14, 2010 while conducting operations in Nogales, Arizona, Border Patrol Agent Brian Terry was shot and died while attempting to arrest five individuals. Two of the guns found at the scene were linked to Fast and Furious.

• Smith-Meck claims weapons were sold in Mexico to middle eastern arms dealers in September 2010. A Moroccon DST commander – on 16 October 2010 also reported Fast and Furious weapons were in the kingdom of Morocco en route to arm the rebels in Algeria.

• Lt. Col Smith-Meck’s research into Terry’s death has led him to suspect a wider weapons transfer scheme may be amidst.

• The retired Marine has been target of harassment and intimidation since looking into the case.

Watch the full interview with Lt. Col. Matt Smith-Meck and Kent Terry below:

Read Mr. Smith-Meck’s open letter to Congress regarding his ongoing investigation into Brian Terry’s death below:

**By: Andrew McKenna and Matthew Smith-Meck**

Border Patrol Agent Brian Terry was murdered on December 14, 2010, ten minutes before his shift ended, and the day before he was going to “blow the whistle” on the Fast and Furious gun-walking debacle. The bullets that ended his life were fired from a Fast and Furious weapon.

Two months earlier, he was visiting his mother in Michigan. Brian, a principled and disciplined former Marine, rarely discussed his work with family. But this trip was different. Speaking with his mother Josephine recently, she told me that Brian acted differently during this visit. He was anxious. It seemed he had the weight of the world on his shoulders. Almost spontaneously over coffee one afternoon, he told his mother, “I just don’t want to go back this time … something bad is going to happen.”

Operation Fast and Furious was initiated by the Bureau of Alcohol, Tobacco, Firearms and Explosives (BATFE) in 2009 ostensibly as a way to confront the problem of illegal weapons traveling from the United States to Mexican drug cartels. The ill-considered operational design involved allowing straw purchasers in the U.S. to buy weapons and deliver them into Mexico under the supervision of law enforcement. The weapons would be tracked by using serial numbers with the hope that future busts would lead U.S. officials to cartel members.

Brian’s brother, Kent Terry, told us recently that following the killing, law enforcement officials were sympathetic, and most importantly, responsive to the Terry family’s concerns. After a memorial for Brian on January 22, 2011 in Tucson, Arizona, the family was invited to a hotel room full of government suits, including prosecutors and FBI agents. The purported purpose of the meeting was to allow Kent and his brother-in-law, Ron, to “ask any questions you might have” about Brian’s death. Rumors of guns being “walked” across the border to Mexico were already swirling. Ron, not one to mince words, immediately asked about the gun-walking. He told us, and Kent corroborated, that the room fell silent. The officials failed to make eye contact (except with each other). That single question effectively ended the meeting. Both Kent and Ron got the gut feeling that they were summoned there not to have their questions answered but as a fishing expedition. How much did Kent and Ron know? Had Brian confided in them about what he knew? Is this why the government, without notifying the family, went into Brian’s private residence after his murder, rifled through his personal effects and removed all electronic/digital devices and returning them, completely wiped clean, to the family a full year later?

A couple hours later in the same hotel, the Terry family was approached my members of the union that represented Border Patrol personnel, including Brian. The union leadership expressed their condolences, but then very cryptically referred to 3 e-mails that they had received from Brian in the weeks preceding his murder. They wanted the Terrys to be aware of them, but said they weren’t allowed to discuss the content. However, it was obvious, based on the union representative’s tone and demeanor, they weren’t typical union communications, such as transfer requests or shift schedules, for example.

On that final visit with his mother, Brian also told her that he was aggressively confronted by a couple of “bad” agents, and that he told them, “No need to talk to me; I’ll just walk away.” Law-enforcement communities are notorious rumor mills, and we suspect that word had somehow gotten around that Brian was going to speak up about weapons going south with BATFE’s permission, and expose, unbeknownst to Brian, the clandestine nature of Operation of Fast and Furious. We suspect this confrontation was borne out of concern to protect the architects and the players. Brian wasn’t part of the Fast and Furious Operation, but he had stopped vehicles attempting to enter Mexico that contained numerous AK-47 assault rifles. When he radioed the discovery to supervisors, the response was “Let ‘em through.” This troubled him.

In January 2011, ATF agents John Dodson and Vince Cefalu “blew the whistle” on Fast and Furious after learning that the ballistic results showed that a Fast and Furious weapon was used to kill Brian.

The House of Representatives’ Committee on Oversight and Government Reform (HOGR) launched an investigation into Fast and Furious. The Justice Department’s reluctance to cooperate was evident from the very beginning. A February 4, 2010 letter from an Assistant Attorney General to Senator Grassley, Ranking Minority Committee Member for the Judiciary, denied that straw purchased weapons were being deliberately sent over the border into Mexico. The Department did a full 180 degree turn almost a year later, officially retracting their earlier assurances, and admitting that the gun-walking operation was real.

Congress decided to dig deeper, issuing subpoenas for any information including e-mails and other correspondence pertaining to Fast and Furious. After much wrangling and negotiation, the DOJ turned over information compiled prior to February 4th, the day when they claimed the operation didn’t allow for the transport of weapons. On May 3, 2012, Chairman Darrell Issa—presumably frustrated by the Department’s stone walling—issued the following points in a memorandum to fellow members of the committee he chaired:

1. How did the Justice Department finally come to the conclusion that Operation Fast and Furious was “fundamentally flawed?”

2. What senior officials at the Department of Justice were told about or approved the controversial gun-walking tactics that were at the core of the operation’s strategy?

3. How did inter-agency cooperation in a nationally designated Strike Force fail so miserably in Fast and Furious?

These questions—four years later—still have not been answered. The Terry family and the American people deserve better. When the investigation began, members of Congress (House Oversight and Government Reform and Senator Grassley’s offices, specifically) and their staffs were very forth coming to the Terry family about the status of the investigation, answering questions and offering support. The Terrys have reported to us this, sadly, is no longer the case. At first the Terry Family truly believed the truth would come out concerning Brian’s murder, including both what reckless decisions about gun-walking were made and by whom within the Justice Department leadership made them. Now, with the knowledge that actionable information regarding “evidence to lay hands on” was provided to law enforcement, HOGR, and Senator Grassley’s offices in 2012 and 2013 without any meaningful responses, the Terry family is rightly distrustful and discouraged.

On January 19, 2016, the Honorable Amy Berman, U.S. District Judge for the District of Columbia, issued an opinion ordering certain withheld documents regarding Fast and Furious be turned over to the House Oversight and Government Reform Committee. Perhaps this new material will reignite the investigative fire for members of Congress and lead to answers for the Terry family, the American people, and the institution of justice. For Brian Terry, the work of Congress has just begun.

Andrew McKenna is the author of “Sheer Madness: From Federal Prosecutor to Federal Prisoner.” He works as a Legal Advocate for Anelli Xavier, P.C.
Web: andrewjamesmckenna.com
Matthew Smith-Meck is an entrepreneur and a retired Marine.