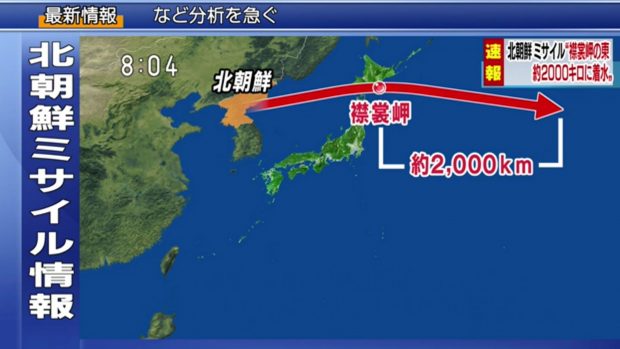 #northkorea launched another #missile. Hearing the sirens out here in #niigata #japan. Thanks for the heads up, J-alert pic.twitter.com/Yd459DPfw8

The South Korean military stated that the projectile was fired from a site in the Sunan district near the North Korean capital. Pyongyang’s previous launch of a missile over Japan last month came from the same site.

Japanese media outlet NHK reported that the missile overflew the northern island of Hokkaido, splashing down 2,000km east. Japanese officials also told NHK that no attempts were made to shoot down the IRBM.

The missile, which was launched at 6:59 a.m. local time, came down into waters 17 minutes later. The projectile reached an altitude of 770km and had a total range of 3,700km.

Given the range, the missile would easily reach beyond the U.S. territory of Guam if fired in its direction – though experts are skeptical of the IRBM’s accuracy.

The launch comes amid growing tensions in the Korean Peninsula following increased U.N. sanctions on Pyongyang for the country’s test of a purported hydrogen bomb.

This story is developing and will be updated as more information becomes available.