The test, according to the South Korean military, was carried out in the South Pyeongan Province at approximately 5:30 a.m.

“North Korea fired an unidentified missile from a site in the vicinity of Bukchang in Pyeongannam-do (South Pyeongan Province) in the northeastern direction at around 5:30 a.m today,” the Joint Chiefs of Staff said in a statement. “It is estimated to have failed.”

The attempted launch comes just one day after President Donald Trump, in an interview published by Reuters Thursday, said a “major, major conflict” was possible with North Korea.

“There is a chance that we could end up having a major, major conflict with North Korea. Absolutely,” Trump said. “We’d love to solve things diplomatically but it’s very difficult.”

A senior Trump official speaking on condition of anonymity Wednesday told reporters outside a classified briefing at the White House that “military preparations” are also underway.

“What you see is a really an integrated effort to prioritize diplomatic and informational aspects of national power, but also what you’ll see soon is using the economic dimension of national power as well as the military preparations that are underway,” the official said.

The failed test, the second this month, follows North Korea’s largest ever live-fire military drill held Tuesday for the 85th anniversary of the regime’s army. 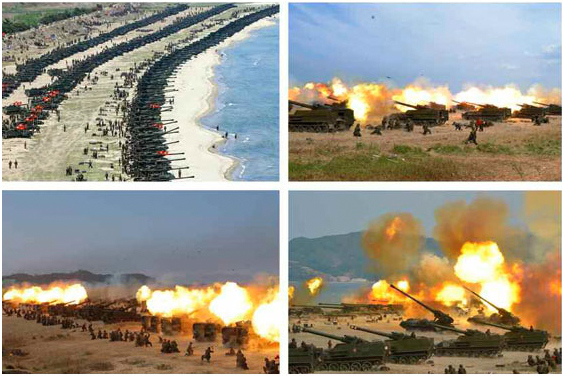 China, who has been increasingly pressured by the Trump administration to stifle North Korea’s nuclear ambitions, also said Thursday that it would conduct live-fire drills and test new weapons in response to the deployment of THAAD, the U.S. anti-missile defense system, in South Korea.