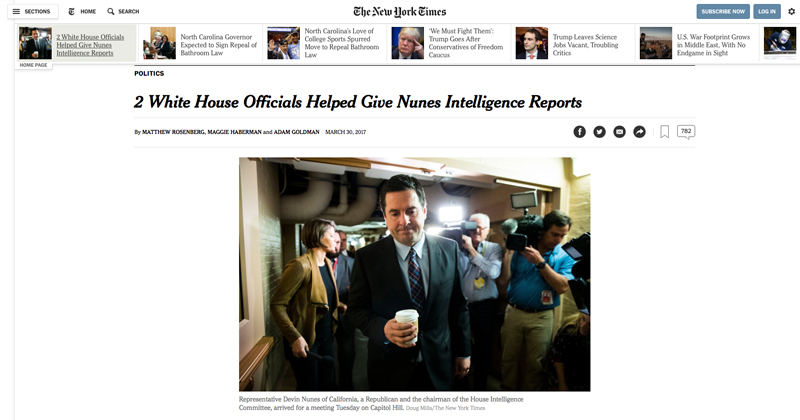 Two White House officials provided Rep. Devin Nunes (R-Calif.), the chairman of the House Intelligence Committee, with intelligence reports showing that President Trump and his team were swept up in foreign surveillance by US spy agencies, claims the New York Times.

“Several current American officials identified the White House officials as Ezra Cohen-Watnick, the senior director for intelligence at the National Security Council, and Michael Ellis, a lawyer who works on national security issues at the White House Counsel’s Office and formerly worked on the staff of the House Intelligence Committee,” the Times reported on Thursday. “A White House spokesperson declined to comment.”

The Times said Nunes was asked to meet the officials in a secure location at the White House where people with security clearances could view classified reports.

“The real issue, Mr. Nunes has said, was that he could figure out the identities of Trump associates from reading reports about intercepted communications that were shared among Obama administration officials with top security clearances.” the report added. “He said some Trump associates were also identified by name in the reports.”

“Normally, intelligence agencies mask the identities of American citizens who are incidentally present in intercepted communications.”

And the mainstream media has been targeting Nunes ever since he pointed out there was “no evidence of collusion” between President Trump’s team and Russia on the night of the presidential election, which of course went against the establishment narrative of “Russian election meddling” being used to undermine Trump’s presidency.

“Nunes’ acknowledgement of the lack of any proof appears believable, as the intelligence community did not even produce a solid piece evidence of the ‘hacking’ itself let alone the vague ‘Russian involvement,'” said former MI5 intelligence officer Anny Machon.