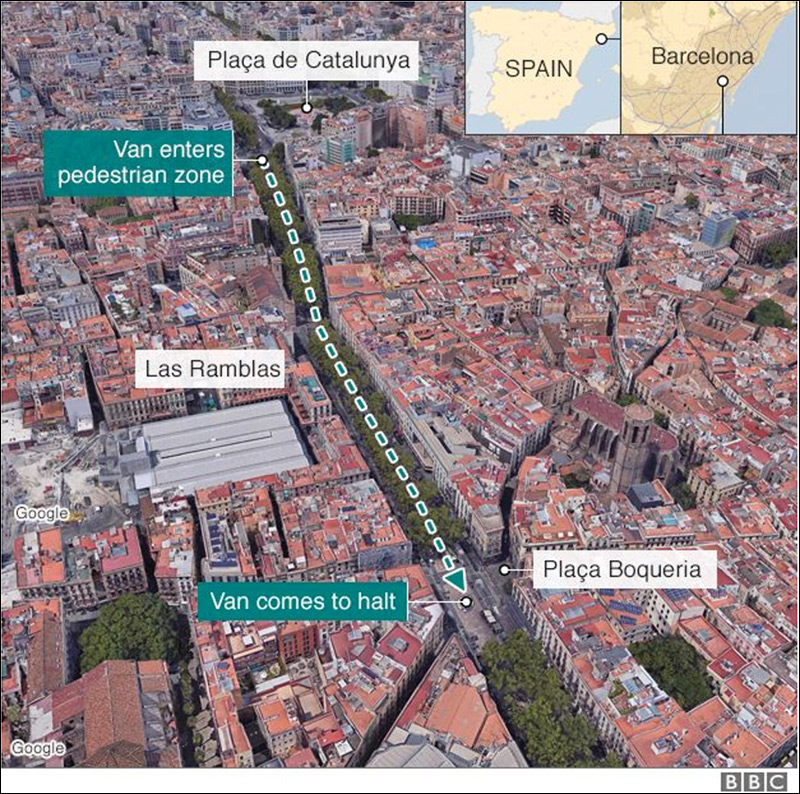 A van plowed into numerous pedestrians outside a food market in Barcelona Thursday reportedly leaving 13 dead and dozens injured, in what police are describing as a terror attack.

“Witnesses said a white van driven by a man mounted the pavement before crashing into pedestrians. The driver then fled the scene,” reports Express.co.uk.

The Daily Mail claims: “Police officers were said to be negotiating with two attackers in a Turkish restaurant where they have taken hostages.”

Barcelona police arrested one suspect, the Associated Press reports, with other reports claiming his name was Driss Oukabir.

Police identify one of Barcelona terrorists as Driss Oukabir. pic.twitter.com/KZ83U8IE6I

At a press conference, police confirmed one person died and 32 people were injured, 10 seriously.

However, “Local media outlets are reporting that 13 have died, citing police sources,” The Guardian reports.

One witness described the van “was going very fast, without caring about who was in its way.”

Islam must be banned in all Western nations!

“Metro lines have been shut and shoppers and pedestrians have been seen running into buildings as armed police flooded the area,” according to The Sun.

A graphic from the BBC maps the path of the truck as it rammed into a pedestrian zone:

Thursday’s truck incident follows months of jihadist attacks in Europe and the UK mainly attributed to radical Islamists, with the terror group ISIS claiming responsibility for much of the violence.