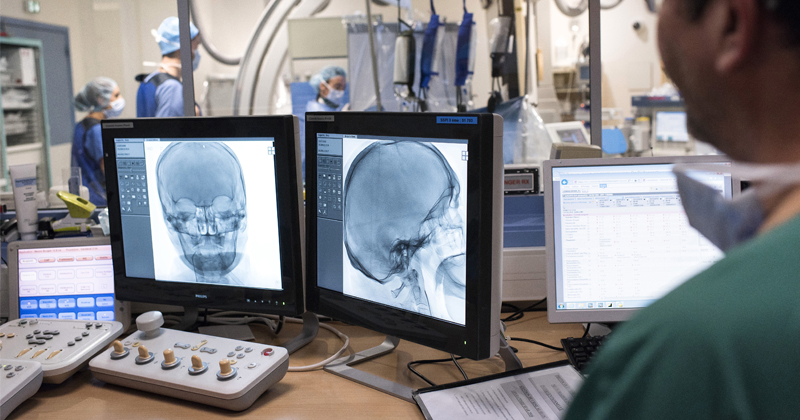 A collaboration between scientists at Rutgers University and Scripps Research led to the discovery of a small molecule that may slow down or stop the progression of Parkinson’s disease.

Parkinson’s, which affects 1 million people in the United States and over 10 million worldwide according to the Parkinson’s Foundation, is a neurodegenerative disorder with no cure.

Symptoms develop slowly over time and can be debilitating to patients, who most recognizably develop tremor, slow movements and a shuffling gait.

A key feature of Parkinson’s disease is a protein named α-synuclein, which accumulates in an abnormal form in brain cells causing them to degenerate and die. However, it has been difficult to target α-synuclein because it does not have a fixed structure and keeps changing its shape, making it very difficult for drugs to target. Because higher levels of the protein in the brain speed the degeneration of brain cells, scientists have been looking for ways to decrease the protein production as a form of treatment.

Disney’s method matches RNA structure with small molecules or drug-like compounds. The two collaborators believed this innovative technology could be used to find a drug that targets the messenger RNA that codes for α-synuclein, which causes the disease, in order to reduce production of the protein in the brains of Parkinson’s patients. Since the protein itself can’t be treated with drugs, RNA could be a more robust and reliable target.

They were right. The NIH-funded study, which was published in the Proceedings of the National Academy of Sciences on January 3, showed that by targeting messenger RNA, the team found a compound that prevents the harmful Parkinson’s protein from being made. This new compound, named Synucleozid, reduces specifically α-synuclein levels and protects cells against the toxicity of the misfolded form of the protein, suggesting that it has the potential of preventing disease progression.

“We found the molecule to be very selective at both the RNA level and the protein level,” Disney says.

“Currently, there is no cure for Parkinson’s disease, and it is truly a devastating disease. For the first time, we discovered a drug-like compound that has the potential to slow down the disease before it advances through an entirely new approach,” said Mouradian. Such a treatment would be most effective for people who are in the early stages of the disease with minimal symptoms, she said.

“Several other experimental drugs currently being tested for Parkinson’s disease are antibodies that target a very late stage of α-synuclein protein aggregates. We want to prevent these protein clumps from forming in the first place before they do damage and lead to advancing disease.,” she said. “This new compound has the potential to do that and could change the course of life for people with this devastating disease.”

Mouradian says this discovery is ‘highly promising’ and is eager for the next steps in optimizing and testing the compound. Additionally, this can benefit another devasting disease that also has α-synuclein clumps, known as Dementia with Lewy Bodies. Further, this new concept of targeting RNA to reduce protein production developed in Disney’s lab at Scripps Research may be applied to other challenging diseases because of their similar undruggable proteins including Alzheimer’s disease.

“The reach of our study could go beyond people with Parkinson’s disease to many other neurodegenerative diseases. It is a classic example of how interdisciplinary research leads to significant change,” she shares.