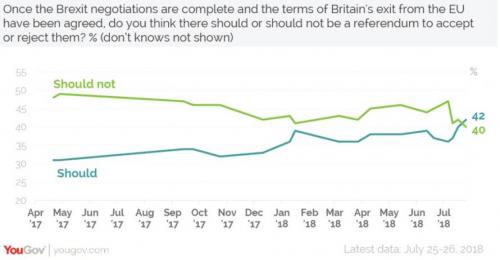 “I have near zero optimism because I think it is going to be very messy,” warned one UK minister, speaking to Bloomberg on condition of anonymity. The prospects of getting an agreement are slim, the minister said. “If we crash out without a deal, it’s going to be a historic catastrophe.”

And he is not alone as the latest YouGov polls show 69% of Brits believe Brexit is going badly and the largest finger of blame for Brexit going badly is being pointed at the government. Two thirds (68%) of those who think Brexit is currently going badly say that it is the government’s fault. This includes three quarters who voted Remain (77%) and 58% of Leave voters.

Additionally, as TruePublica.org notes, with lots of talk of preparing for a no-deal Brexit, the possibilities of the Tory party completely disintegrating in 2019 becomes ever-more real. The electorate is now becoming very nervous of what Brexit may bring, given that the Conservatives have no idea themselves, which means it should be no surprise that Theresa May’s favorability score plummets to new low.

It should be noted that, as stated above, those turning against the Prime Minister appear to be Leave voters. The only truly amazing statistic about Theresa May is that at the summer recess – she’s still Prime Minister. And few would have bet on that at any odds just six months ago.

Perhaps even more ominously, for the first time ever, more people support a second referendum – 42% of Britons think there should be a referendum on the terms of the Brexit deal, 40% do not.

When Brexit talks resume in Brussels in mid-August, Bloomberg points out that British and European officials will have just 10 weeks to finalize the complex set of international negotiations before their October deadline. That’s because they need to leave time to ratify whatever agreement emerges in both the U.K. and European Parliaments before Britain exits the bloc on March 29 next year.

It’s a tough ask and in private, ministers and senior officials in May’s team are terrified that the negotiations will fail. As Bloomberg sums up so eloquently, that would mean the U.K. crashing out of the EU with no deal, disrupting trade, creating chaos in financial markets, blocking manufacturers’ supply chains and potentially causing shortages of food and medical supplies. It could be an economic and political crisis unparalleled in the U.K. since World War II.

While progress has been slow, some had remained hopeful of a solution (May’s aim was to keep trade with the bloc flowing freely while still liberating the U.K. from the EU’s formal customs union, a necessity if the government is to deliver on what it sees as the key prize of Brexit: free-trade deals with countries around the world), but on Thursday, the EU delivered a potentially knockout blow.

“The EU cannot — and the EU will not — delegate the application of its customs policy and rules, VAT and excise duty collections, to a non-member who would not be subject to the EU’s governance structures,” he said.

“The EU appears to have its sights on a different prize. Barnier told May that he’d be happy to make a better offer on trade than the bare-bones deal currently on the table — if she abandons her stance on leaving the bloc’s customs union.”

“It was a provocative intervention. Not only is it a key red line for May and included in her party’s election manifesto, but her main political opponents — Jeremy Corbyn’s Labour Party — have pledged to enter a customs union with the bloc.”

As Barnier will also know, there are at least a dozen pro-EU Tories who are ready to defy May in favor of keeping a customs union. If even a few more join them, May could lose a vote on the issue and see a central plank of her Brexit strategy overturned.

“Walking away with no deal would be a complete and utter disaster, but a lot of hard-line Brexiteers are basically saying ‘damn them,”’ said Conservative lawmaker Keith Simpson. “They need to explain about what will happen to jobs and the economy.”

Can May avoid the looming trap?

Despite the doom and gloom, some diehard Mat supporters remain optimistic…

…one minister said, adding that for collaboration in the national interest to work, the threat of a no-deal Brexit — and a chaotic general election — would have to be imminent.

And even then, the minister warned, “it will need a magic moment of vision” to save the prime minister, and the country, from disaster.

And finally, Stuart Hannah summed up how many Brits feel with a slightly different spin on it all:

“We need to elect a few more Farage style, awkward bastard MEP’s and send them back to the EU parliament to kick ass and get the EU working properly again for the benefit of all.”

Admittedly, we do miss those epic rants on the floor of the EU Parliament.