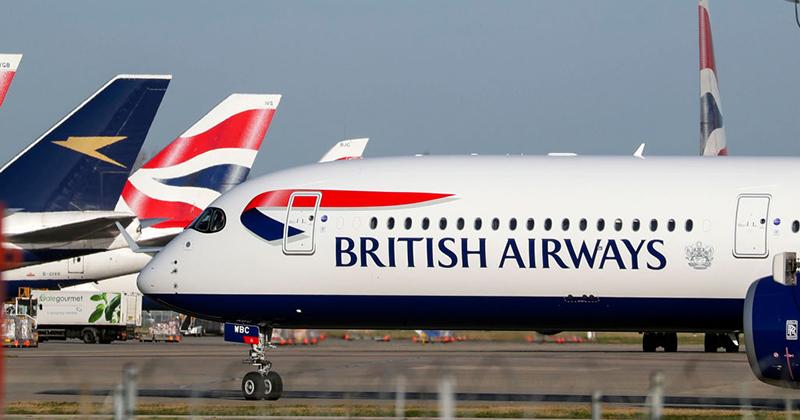 As the Trump Administration denies plans to shut down all passenger air traffic to China, more airlines around the world are suspending routes, a sign that the coronavirus outbreak could do permanent damage to the industry.

Just hours after the UK Foreign Office warned Britons against traveling to China, British Airways, Britain’s flag carrier, and its second-largest airline in the UK, suspended all flights to China.

British Airways operates direct flights from Heathrow to Beijing and Shanghai, but right now, passengers can’t book flights on those lines until Feb. 29. CNN called it “the most drastic action yet by a major airline” in response to the crisis.

The decision comes after United Airlines said it would temporarily reduce the number of flights between the US and China.

“We have suspended all flights to and from mainland China with immediate effect following advice from the Foreign Office against all but essential travel,” the company said in a statement Wednesday.

Alex Jones is live on air laying out exclusive information vital to the public. The Coronavirus is now a global pandemic according to previously-used metrics on outbreaks.

This comes after United said Tuesday that it had seen a “significant decline in demand” and been forced it to suspend flights from Feb. 1 through Feb. 8 between its US hubs and Beijing, Hong Kong and Shanghai. In total, 24 round trips have been impacted between Hong Kong to San Francisco and Newark; Beijing to Dulles, O’Hare and Newark; and Shanghai to San Francisco, Newark and O’Hare.

American Airlines, Delta and United all extended change fee waivers through the end of February, while Hong Kong flagship carrier Cathay Pacific said it will reduce the capacity of flights to and from mainland China by half or more until the end of March.

Finland’s Finnair is canceling three weekly flights between Helsinki and Beijing between Feb. 5 and March 29, and two weekly flights between Helsinki and Nanjing between Feb. 8 and March 29, because of the suspension of group travel by Chinese authorities. It will continue to operate flights to Beijing, Shanghai, Hong Kong and Guangzhou.

There are now 5,974 cases in China, with 1,239 of whom are severely ill, according to state media on Wednesday. Initial theories, put forward by some infectious disease experts, that the mortality rate of the virus is much lower than reflected in press reports because thousands with mild cases are likely toughing it out in their homes. If anything, it looks like the virus is more lethal than we previously believed.

Per the SCMP, a 48-hour span of no new nCoV infections came to an end Wednesday when Hong Kong authorities announced two more patients tested positive for the potentially deadly illness, bringing the local total to 10, as the HK government suspends high-speed rail travel between the Special Administrative Region and the mainland. The HK Department of Health said the two new patients, an elderly couple, aged 72 and 73, tested positive at Queen Mary Hospital in Pok Fu Lam, and, because of their age, fall into the high-risk category of infections. More than 100 people are still in isolation in HK.

The situation is growing increasingly worrisome in Guangdong province, which is centered around the city of Guangzhou, the fifth-largest in China.

Guangzhou is at the center of a massive conurbation stretching out all the way to Shenzen, and to the other neighboring cities of Foshan, Dongguan, Zhongshan and several other neighboring provinces. This agglomeration is one of the largest of its kind on Earth, home to more than 100 million. City officials announced five new infections, two locals and three foreigners. With more than 270 confirmed cases, this well-connected and economically important province is behind only Hubei and Zhejiang in terms of number of cases.

Now that several countries have copies of the coronavirus genome, the race for a workable vaccine is intensifying. Russia joined that race on Wednesday after receiving a copy of the virus genome from China, Russian state media reported on Wednesday. The US said on Tuesday that it would take three months to start initial trials for a vaccine that it’s developing, and three further months to gather data.

In Hong Kong, infectious diseases expert Professor Yuen Kwok-yung said on Tuesday that the city’s researchers had stumbled on a vaccine, but that it would take months to test on animals and at least another year to conduct trials on humans before it could be confirmed ready for human use. Scientists in Melbourne said they grew the virus from a patient sample, which could prove a “game-changer” in combating the outbreak. It was the first time the virus had been grown in a cell culture outside China (here’s hoping it isn’t misused as a potential bioweapon).

After confirming the first case of human-to-human transmission in Japan, health officials in Tokyo have shared more information about the case with the press: The man did not travel to Wuhan but drove buses with tour groups from the city twice this month. The man is in his 60s and lives in Nara Prefecture, according to the Japan Times.

Overnight, the first case of the virus in the Middle East have been confirmed in the United Arab Emirates, according to the country’s Ministry of Health and Community Protection. The 4 infected patients are members of a family that had traveled from Wuhan. In its statement, the health ministry reported the family as being in a stable condition under medical observation, according to CNBC.

As hysteria surrounding the outbreak grows, SCMP reports that resentment toward people from Wuhan is growing across China, as provincial authorities ramp up screenings of those from Wuhan, and citizens build unauthorized roadblocks to keep strangers out of their towns.

Meanwhile, President Xi said Wednesday that “preventing and containing the virus remains a severe and complex task,” a follow up to his claims that China would do whatever is necessary to contain the “demon” virus.