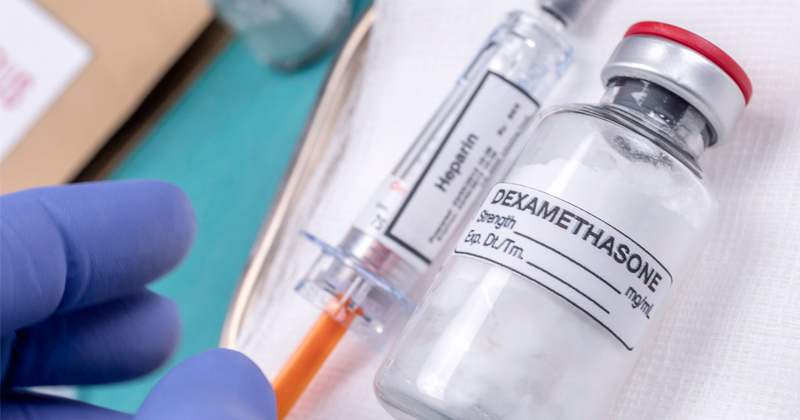 British researchers say a steroid called dexamethasone reduces deaths among the most severe Covid-19 patients by a third. The discovery comes after the medical establishment shunned hydroxychloroquine as a potential treatment.

Dexamethasone is an inexpensive and generic steroid whose price and popularity has tanked in recent years. However, the drug may soon be used to treat the most severely ill coronavirus patients, if a new study from the University of Oxford is anything to go by.

Researchers there announced on Tuesday that, when administered orally or by IV, dexamethasone reduced deaths by 35 percent in Covid-19 patients requiring ventilation, and by 20 percent in patients needing supplemental oxygen. Patients with mild symptoms were unaffected.

The researchers have yet to publish the final details of the study, but Chief Investigator Peter Horby declared that the drug “should now become standard of care in these patients.” He added that dexamethasone is “inexpensive, on the shelf, and can be used immediately to save lives worldwide.”

Dexamethasone is just one of a number of drugs investigated in recent months as a potential coronavirus treatment. Perhaps the most well known of these drugs is hydroxychloroquine, a generic anti-malarial that some studies foundworked wonders on the deadly virus if administered alongside the antibiotic azithromycin.

The combination was endorsed by US President Donald Trump as a “game changer,” yet the scientific establishment soon turned on the idea. An article in The Lancet, an influential medical journal, stated that the drug was not only ineffective, but could actually increase mortality rates. However, that study was based on flawed data, and was retracted earlier this month.

Hydroxychloroquine was, however, well and truly tainted by that time. US regulators revoked their emergency approval for the drug on Monday, a month after the World Health Organization suspended trials, and long after media attention turned to the more expensive and untested remdesivir as a potential treatment.

Elsewhere, Russia has approved an anti-influenza drug, Avifavir, for the treatment of the coronavirus. Some 60,000 courses of the drug will be delivered to Russian hospitals this month, after the Russian Direct Investment Fund saw how it “demonstrated high efficiency” in clinical trials.

No vaccine against the virus has yet been discovered. The University of Oxford moved one candidate to human trials in April, with results expected at the end of the summer. Researchers at Imperial College London – an institution maligned for its doom-mongering coronavirus predictions earlier this year – will also begin human trials of a potential vaccine this week. Another trial, by US drugmaker Johnson & Johnson, is set to begin in July.

Since emerging from the Chinese city of Wuhan around Christmas, the new coronavirus has infected more than eight million people worldwide, and killed nearly 440,000. Daily deaths, however, peaked in April and have been slowly and steadily declining since.