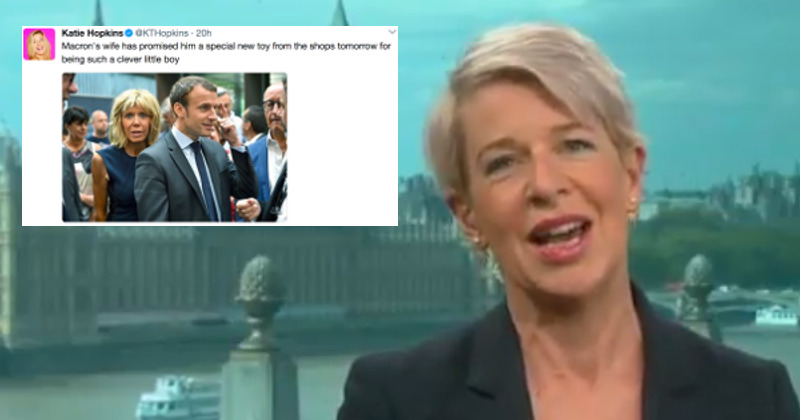 Katie Hopkins, a British journalist and radio host, tore into French president-elect, Emmanuel Macron and his Astroturf ‘movement,’ during a series of interviews and social media posts yesterday, saying his supporters were dazzled by “screen bites for those with ADD.”

“Macron is a banker, pretend politician & married to his nan. There will be rage on the streets of France,” she said.

Macron is a banker, pretend politician & married to his nan. There will be rage on the streets of France pic.twitter.com/JFK6empt2A

“If Macron gets in – the little boy who was a banker, who’s always been a banker or a politician, and is married to someone who is the same age as his nan – there is going to be rage on the street,” she told Fox Business in a pre-vote interview.

She drew correlations to the Brexit referendum and US presidential election, citing the growing divide between cosmopolitan progressives in big cities like Paris, London, and New York City, and middle and working class populations who reside in more rural areas that are experiencing a decrease in representation in national politics and economic decisions.

“I can see Macron winning this thing, but there’s going to be so much anger, so much resentment – exactly like the picture here in the UK, where it’s London versus the rest of the UK,” she said. “Same in America – if Trump hadn’t won, that anger about the people who feel no one’s listening – and that’s really the jobless workers in France.”

Macron's wife has promised him a special new toy from the shops tomorrow for being such a clever little boy pic.twitter.com/vDlmuH3G91

“Macron’s wife has promised him a special new toy from the shops tomorrow for being such a clever little boy,” she later wrote in Tweet.

In a post-election interview, Hopkins pointed out that Macron, whom she called an updated copy of current president François Hollande, has already helped to bring about France’s crushing 10% unemployment rate through his policies as the former Minister of Economy and Finance under Hollande.

“He’s never had a real job, he doesn’t have any children, he doesn’t have a proper family – so he doesn’t connect with people,” she said. “Ultimately, he thinks that we can solve all the problems of the world by opening our borders and paying for a few people to go to the movies.”

“In reality, we just had the Bataclan attacked, we had the attack in Nice, we’ve got these things springing up to stop trucks ramming people – I think another terror attack and you’ve got to question what this 39-year-old is going to do.”

“His speech last night told us everything he was against, but it didn’t tell us anything that he was actually standing for,” she assessed.

En route to his victory speech, Macron entered with the European Union anthem playing as his soundtrack – not the French national anthem.

Emmanuel Macron walks out to address supporters in Paris to the EU anthem ‘Ode to Joy’ #presidentielle2017https://t.co/MVFsTGfjO9 pic.twitter.com/5DJacPTECT

Macron takes to the stage to the EU 'National' anthem. Tells you everything you need to know. His first trip – Berlin #Presidentielle2017

Macron’s base is largely composed of pro-EU adherents to globalist group-think, and were likely unphased (or enthusiastic) about his decision to eschew the French anthem in favor of the ode to superstate.

Macron supporters are hurting my heart – 20 mins until results pic.twitter.com/6PJiAS3elf

Not certain this lot know where they are. Or why. Or care. #frenchelection2017 pic.twitter.com/5LVfE75WD6