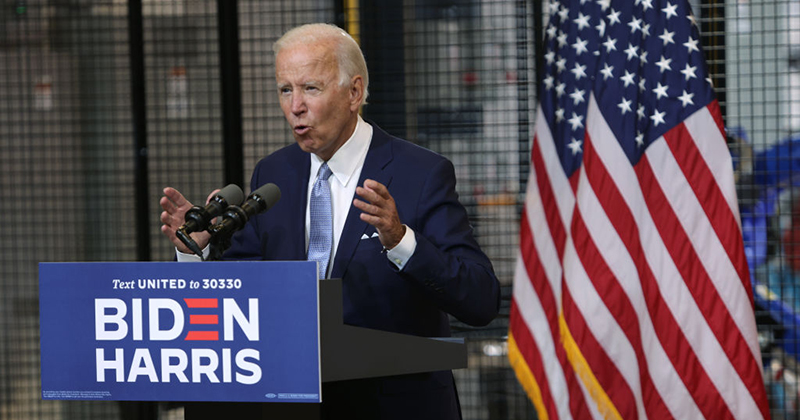 Joe Biden was allowed out of his basement Monday, and immediately contributed to yet more plummeting poll numbers by making several gaffes, including declaring that President Trump is “stroking violence” in US cities.

“In the early days of World War II, Franklin Roosevelt, and I quote, ‘the news is going to get worse and worse before it gets better and better, and the American people deserve to have it straight from the shoulder.’” Biden said, barely making any sense.

The rest of his appearances were riddled with flubs and head scratching moments:

At one point, Biden babbled about coronavirus, stating “COVID has taken this year, just since the outbreak, has taken more than 100 years… Look. Here’s… The lives… It’s just… I mean, think about it. More lives this year than any other year, for the past hundred years.”

BIDEN: “COVID has taken this year, just since the outbreak, has taken more than 100 years… Look. Here's… The lives… It’s just… I mean, think about it. More lives this year than any other year, for the past hundred years." pic.twitter.com/ZJkt9L3BQK

Speaking at a former steel factory in Pittsburgh, Penn., Biden once again accused Trump of being behind the rioting, declaring that Trump “can’t stop the violence — because for years he has fomented it.”

Biden also weakly attempted to distance himself from radical leftists, proclaiming to the crowd “You know me. You know my heart. You know my story — my family’s story. Ask yourself, do I look like a radical socialist with a soft spot for rioters? Really?”

Earlier in the day, Biden appeared to threaten Americans with more violence unless they vote for him:

Does anyone believe there will be less violence in America if Donald Trump is reelected?

This is a threat. https://t.co/kGpVPgWegN

"Vote for me or else my supporters will burn down your cities" is quite the GOTV pitch!

Are you trying to blackmail the public to vote for you or else your anarchists will continue to destroy America?

Yes! Yes we do. pic.twitter.com/pszBY5hpCt