MSNBC Morning Joe host Mika Brzezinski continued her relentless opposition to the Trump presidency Wednesday, this time targeting the President’s wife and his daughter, saying they enable him to be a ‘sexist bully’.

Brzezinski began by attacking Press Secretary Sarah Huckabee Sanders, who told reporters yesterday that anyone who interpreted Trump’s tweet about Sen. Kirsten Gillibrand Tuesday as a form of sexual innuendo needs to get their mind out of the gutter.

“I want to know how she does that,” Brzezinski said, adding that Trump “should have apologized for being a sexist pig.”

“For sexually harassing on Twitter,” she continued. “For using sex to denigrate women.”

Brzezinski then claimed that the president is “obsessed” with women who reject him, and went on to attack the first lady Melania as an enabler.

“He has some special problem with women and the women around him, his wife, who has a platform against cyber bullying — that’s a joke,” Brzezinski said.

“That is the saddest thing I’ve ever seen in this White House ever in my life,” Brzezinski added, “and his daughter, who came to Washington to work for the president and develop a platform for women, go home. Go home. You are doing nothing if you stand by this president, and you should think of the country rather than your brand.”

She then repeated her previous demand that everyone on the White House staff should be ashamed for not disavowing Trump. 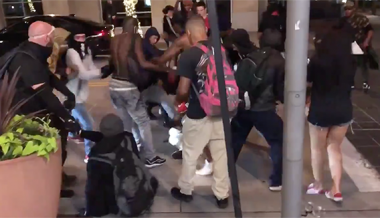