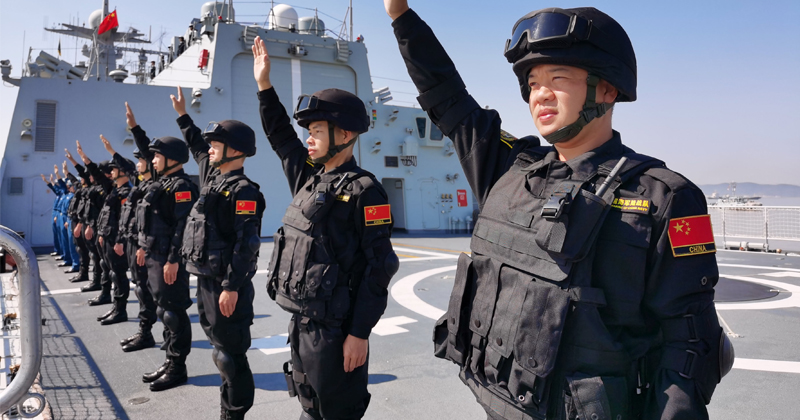 Is the U.S., preoccupied with a pandemic and a depression that medical crisis created, prepared for a collision with China over Beijing’s claims to the rocks, reefs and resources of the South China Sea?

For that is what Mike Pompeo appeared to threaten this week.

“The world will not allow Beijing to treat the South China Sea as its maritime empire,” thundered the secretary of state.

“America stands with our Southeast Asian allies and partners in protecting their sovereign rights to offshore resources … and (we) reject any push to impose ‘might makes right’ in the South China Sea.”

Thus did Pompeo put Beijing on notice that the U.S. does not recognize its claim to 90% of the South China Sea or to any exclusive Chinese right to its fishing grounds or oil and gas resources.

Rather, in a policy shift, the U.S. now recognizes the rival claims of Vietnam, Malaysia, Indonesia, Brunei and the Philippines.

To signal the seriousness of Pompeo’s stand, the U.S. sent the USS Ronald Reagan and USS Nimitz carrier battle groups through the South China Sea. And, this week, the guided-missile destroyer USS Ralph Johnson sailed close by the Spratly Islands.

But what do Mike Pompeo’s tough words truly mean?

While we have recognized the claims of the other littoral states of the South China Sea, does Pompeo mean America will use its naval power to defend their claims should China use force against the vessels of those five nations?

Does it mean that if Manila, our lone treaty ally in these disputes, uses force to reclaim what we see as its lawful rights in the South China Sea, the U.S. Navy will fight the Chinese navy to validate Manila’s claims?

Has Pompeo drawn a red line, which Beijing has been told not to cross at risk of war with the United States?

If so, does anyone in Washington think the Chinese are going to give up their claims to the entire South China Sea or retreat from reasserting those claims because the U.S. now rejects them?

Consider what happened to the people of Hong Kong when they thought they had the world’s democracies at their back.

For a year, they marched and protested for greater political freedom with some believing they might win independence.

But when Beijing had had enough, it trashed the Basic Law under which Hong Kong had been ceded back to China and began a crackdown.

The democracies protested and imposed economic sanctions. But the bottom line is that Hong Kong’s people not only failed to enlarge the sphere of freedom they had, but also they are losing much of what they had.

The Americans, seeing Hong Kong being absorbed into China, are now canceling the special economic privileges we had accorded the city, as the British offer millions of visas to Hong Kong’s dissidents who fear what Beijing has in store for them.

“The world received disturbing reports today that the Chinese Communist Party is using forced sterilization, forced abortion, and coercive family planning against Uyghurs and other minorities in Xinjiang, as part of a continuing campaign of repression.”

These reports, said Pompeo, “are sadly consistent with decades of CCP practices that demonstrate an utter disregard for the sanctity of human life and basic human dignity.”

China has rejected U.S. protests of its treatment of Uighurs and Kazakhs and of its handling of Hong Kong as interference in its internal affairs and none of America’s business.

As for the South China Sea, China dismissively replied, the U.S. seems to be “throwing its weight around in every sea of the world.”

These American warnings, and Beijing’s response, call to mind the darker days of the Cold War.

So, again, the question: Is America prepared for a naval clash in the South China Sea if Beijing continues to occupy and fortify islets and reefs she claims as her own? Are we prepared for a Cold War II — with China?

While China lacks the strategic arsenal the USSR had in the latter years of the Cold War, economically, technologically and industrially, China is a far greater power than Soviet Russia ever was. And China’s population is four times as large.

Can we, should we, begin to assemble a system of alliances similar to what we had during the Cold War — with NATO in Europe and Asian security pacts with Japan, South Korea, the Philippines, Taiwan, Australia and New Zealand? Should we adopt a policy of containment of Communist China, which, says Pompeo, is an expansionist and “imperialist” power?

Before we plunged into our half dozen Middle East wars, we didn’t think through where those would end. Have we considered where all our belated bellicosity toward Beijing must invariably lead, and how this all ends?

A Twitter Administration control panel was hacked into revealing alleged leaked pictures spotlighting the buttons ‘Trends Blacklist’ and ‘Search Blacklist’, indicating Twitter DOES have the ability to shadowban its users. Exposing that Twitter CEO Jack Dorsey clearly lied to Congress.