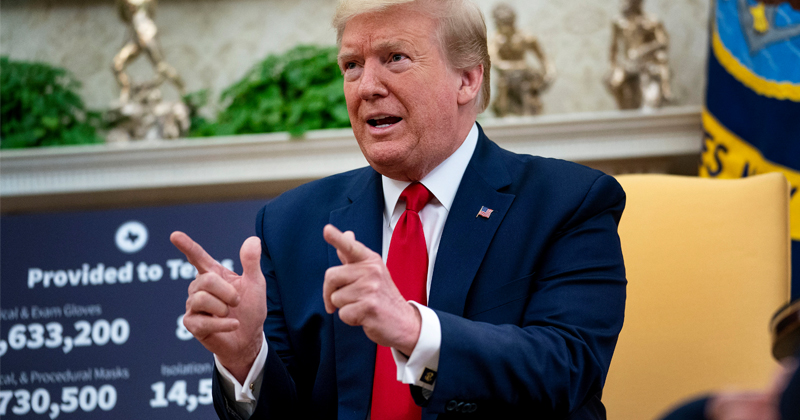 After Pearl Harbor, FDR declared that his role of “Dr. New Deal” had been superseded, replaced by his new role, “Dr. Win the War.”

Tuesday, President Donald Trump signaled that, in the war on the coronavirus pandemic, he, too, is executing a strategic pivot.

Where the medical crisis had been the central front, pulling the U.S. economy out of its coma is now his principal objective.

Trump is not unaware of the consequences of this decision.

“Tremendous progress” has been made in dealing with the medical crisis, Vice President Mike Pence told reporters Tuesday, adding that the White House task force he chairs could be phased out in June.

Wednesday, Trump reversed that. From the public reaction, by popular demand, said Trump, the task force, whose primary medical voices are Drs. Anthony Fauci and Deborah Birx, will continue.

First, there is not a great deal more the White House can do to slow the inexorable momentum of the disease itself.

“Social distancing” and “sheltering” have been in place for weeks. So, too, are the programs for producing masks, gowns, gloves, tests and ventilators. Trump cannot create any more from a White House podium.

Invariably, while there, he is baited and thrown on the defensive by a hostile press demanding he explain why he did not act sooner.

The White House briefings on the medical crisis have reached a point of diminishing returns. These invariably return to statically grim news — the new hospitalizations, the latest death toll, the “hot spots” where the coronavirus has flared up and is now raging.

The medical crisis is essentially out of the president’s control; its future will be largely dictated by the coronavirus pandemic itself.

Moreover, the economy is familiar and friendly terrain for Trump. There, he has a three-year record of undeniable success. In this crisis, the president can decide, lead, act and produce visible results.

And in moving from the medical crisis to the economic crisis, Trump has weapons to wield like the veto power to shape policy and directives to issue from the Executive Branch.

With this pivot, Trump is wagering his presidency on a belief that, by mid-June, the first large wave of deaths from the pandemic will have passed, the numbers will be diminishing, and almost all of America will be ready to get back to work.

Trump is betting that it does not matter if the country does not agree with him to open up today. By July, the country will agree.

By summer’s end, he sees himself as having led us through the medical crisis that is then receding, and up and out of a Second Depression. That will be his best argument for reelection.

If this scenario unfolds, Trump can make the case that while China was the origin of the Wuhan virus that killed scores of thousands of Americans, it was Donald J. Trump who led us through the tragedy, and he is leading us forward, once again, to a new prosperity.

What will be Joe Biden’s argument to lead America, after having sat out the worst crisis since World War II in his basement?

By midsummer, the country will have caught up with Trump. That is the idea that animates the pivot.

And it is not a bad wager. Does anyone believe it will be possible to keep hundreds of millions of Americans in their homes in June, July and August?

Europe is already ahead of us. Italy, which has now been passed by Britain as the nation in Europe with the most deaths, is already starting to open. So, too, is Germany, the largest European nation with the fewest deaths. And Austria is ahead of both.

The mainstream media and left-wing of his Democratic Party want the governors to keep the states locked down as the only way to avert a second wave of infections. And they may be right.

But however many victims succumb to this pandemic, it is going to end, and America is going to be reopened. The closer we are to both goals by Nov. 3, the better Donald J. Trump’s chances of retaking the oath on Jan. 20, 2021.

That’s the way Trump is betting.