Build-A-Bear, the popular children’s chain, had to shut down a nationwide promotion after long lines grew chaotic at every store, which draws parallels to to the immigration crises in the US and Europe – and how President Trump is handling border security.


The ‘Pay Your Age’ promotion allowed children to build a stuffed animal with a price matching their age. For example, $3 for a three-year-old, $5 for a five-year-old etc.

This triggered mass chaos as tens of thousands of families descended upon nearly every mall in America, causing nationwide hysteria due to “unprecedented response” and “significantly longer than expected lines,” according to the company itself.

This video shot outside a Build-A-Bear in Lubbock, Texas, is no different than nearly every other store:

One store in Florida was so unruly that people were sneaking past barricades to get inside, and by 11 a.m., Build-A-Bear’s corporate leaders had to stop the promotion.

“Per local authorities, we cannot accept additional Guests at our locations due to crowds and safety concerns,” Build-A-Bear posted to its Facebook page. “We have closed lines in our U.S. and Canada stores.

“We understand some guests are disappointed and we will reach out directly as soon as possible.”

Ironically, the chaos has some similarities to the ongoing migrant crisis – and Build-A-Bear’s corporate response isn’t far removed from President Trump’s response to border security, which many European countries are now copying.

For example, Hungary, Italy and Austria are ending the open borders “promotion” pushed by EU officials which led to long lines of economic migrants entering Europe, many of whom were also trying to break through barricades: 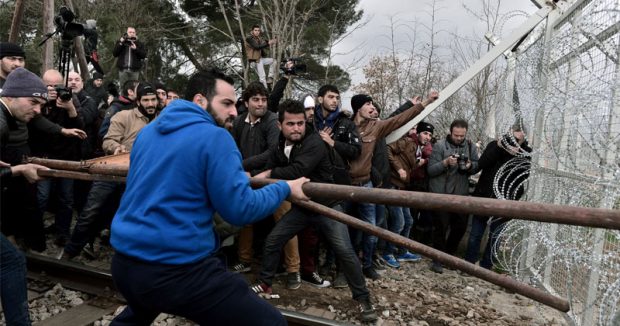 These countries are following the example set by President Trump, who reacted much like Build-A-Bear’s corporate leaders by shutting down the open borders “promotion” pushed by the Obama administration.

The Obama administration in particular had offered incentives for economic migrants to enter the country illegally, such as the “catch and release” program in which Border Patrol agents were told not to arrest and deport newly arrived illegal immigrants.

Furthermore, Central American newspapers touted Obama’s lax immigration enforcement; for example, La Prensa of Honduras said “children will be accommodated for between three and four months, while their parents or relatives are located in the United States.”

This ultimately led to President Trump ending Obama’s “promotion” which had led to unprecedented crowding at immigration centers across the border.