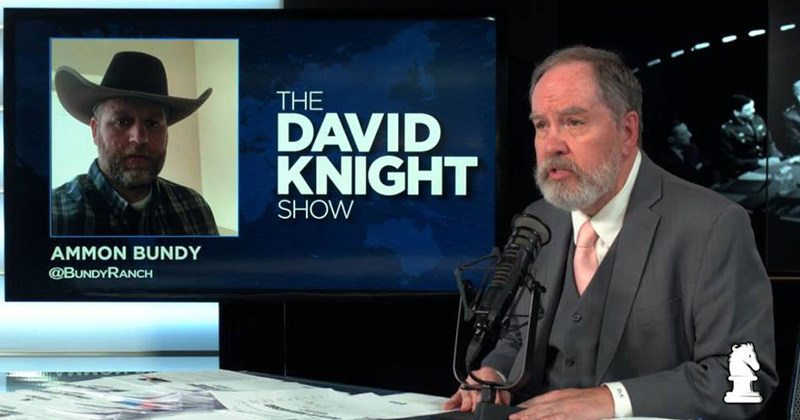 Ammon Bundy joined The David Knight Show Wednesday to discuss how a community is coming together to exercise their freedom, including Easter worship service, as government at every level is rebelling against the Constitution.

However, mainstream media outlets such as The New York Times are twisting the narrative surrounding the group, reporting “A ‘Liberty’ Rebellion in Idaho Threatens to Undermine Coronavirus Orders.”

Explaining what the Idaho patriots are doing to upset globalist news outlets, Bundy said, “We’re simply gathering people together. We’ve been meeting and communicating just to make sure we have enough of us together that when we begin to, well we are, we’re just exercising our rights as they’re ours to exercise, we’re just living normal.”

Later, Bundy read a segment from the website of the United States Holocaust Memorial Museum that reveals shocking parallels between the COVID-19 scare and the Nazi party’s rise to power.

From 1933 to 1945, Nazi Germany carried out a campaign to ‘cleanse’ German society of individuals viewed as biological threats to the nation’s ‘health.’ Enlisting the help of physicians and medically trained geneticists, psychiatrists, and anthropologists, the Nazis developed racial health policies that began with the mass sterilization of ‘genetically diseased’ persons and ended with the near annihilation of European Jewry. With the patina of legitimacy provided by ‘racial’ science experts, the Nazi regime carried out a program of approximately 400,000 forced sterilizations and over 275,000 euthanasia deaths that found its most radical manifestation in the death of millions of ‘racial’ enemies in the Holocaust.

Remember, the same Nazi scientists who pushed this propaganda on the German people were recruited by The United States government in Operation Paperclip, and their beliefs continue to influence the globalist agenda to this day.

In the remainder of the interview, Knight and Bundy discuss government tracking of citizens, forced vaccinations, travel restrictions and much more.

Watch David elaborate on the “Liberty Rebellion” in the following show segment: