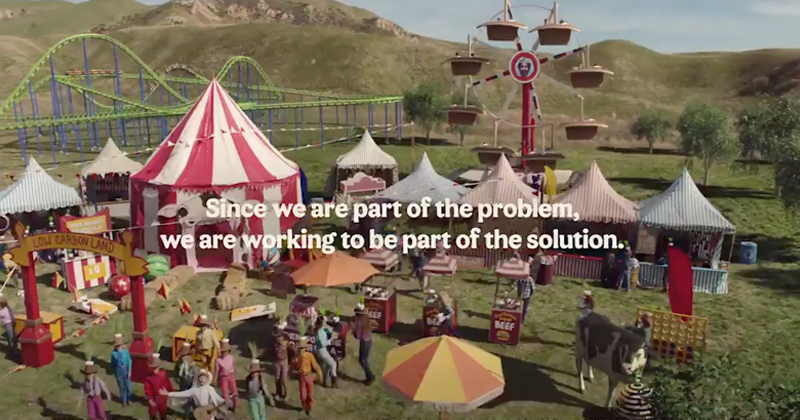 “Cow farts & burps are no laughing matter,” states the ad promoted on social media. “They release methane, contributing to climate change. That’s why we’re working to change our cows’ diet by adding lemongrass to reduce their emissions by approximately 33%.”

cow farts & burps are no laughing matter. they release methane, contributing to climate change. that’s why we’re working to change our cows’ diet by adding lemongrass to reduce their emissions by approximately 33%. learn about our ongoing study: https://t.co/kPCXpjfbGL #CowsMenu pic.twitter.com/DnmF8gVVL0

The burger giant plans to launch their new burgers in select liberal cities.

The company’s goal of reducing cow fart emissions is in line with the far left’s stated plan to reduce “emissions from cows,” as stated in a “Green New Deal FAQ” 10-year plan that appeared on Congresswoman Alexandria Ocasio-Cortez’s (D-NY) congressional website in February 2019.

An adviser for Ocasio-Cortez initially told Tucker Carlson the document in question had been fabricated, telling the Fox News host, “We never would and AOC has never said anything like that… I think you’re referring to some sort of document, some sort of doctored document that someone else has been circulating.”

AOC’s former chief of staff Saikat Chakrabarti later admitted to NPR the document did originate on the congresswoman’s website, but blamed an unnamed staffer for launching a “clearly unfinished” draft of the proposals “by mistake.”

AOC also expounded on the important “issue” of cow flatulence during a town hall with MSNBC’s Chris Matthews in March 2019.

AOC Has Become An Embarrassment For The Democrat Party