National Geographic’s recent article, “The City Solution: Why cities are the best cure for our planet’s growing pains,” argues that urbanization is not only “good news,” but also, “the best hope for lifting people out of poverty without wrecking the planet.” Making the argument, National Geographic cites Harvard economist Edward Glaeser who considers Wall Street as the “quintessence of the vibrant city.” He insists that the trading floor exemplifies the valuing of information over space and that cities in general produce more because “the absence of space between people” reduces costs on transporting goods, people, and ideas. There is also David Satterthwaite of the International Institute for Environment and Development, London, who claims the problem of growing cities isn’t that too many people are being drawn into them, but rather the inability of mayors to “govern them.”

Cited by National Geographic as a “hopeful example” of how to manage rapid urbanization is the South Korean capital of Seoul. Described is a centrally planned totalitarian dystopia literally started in the wake of the near total destruction the city saw during the Korean War and its reemergence under military dictator Park Chung-Hee. In this model of recommended urbanization, entire districts can be bulldozed to make way for denser housing and features serving whatever the “greater good” might decide. The metric of success and livability is apparently the material wealth and the superficial trappings residents adorn their uniform living quarters with, signifying that it’s not that bad after all.

One picture featured in the article shows identical apartment blocs with different families occupying them and decorating them differently. Without National Geographic’s captions coaxing a reader along, one might conclude they are well-dressed, spacious jail cells.

While the story National Geographic tells does explain why urbanization is taking place now, it fails entirely to justify why it should continue or why it is supposedly our “best hope.”

Harvard economist Edward Glaeser concludes, in regards to the environmental impact of not urbanizing that “it would be a lot better for the planet if people in those countries end up in dense cities built around the elevator, rather than in sprawling areas built around the car.” What National Geographic and the experts it deferred to in writing this article fail to understand is that population distribution alone is not the determining factor of either economic prosperity or environmental impact. It is instead what current technology makes possible with such population distributions. 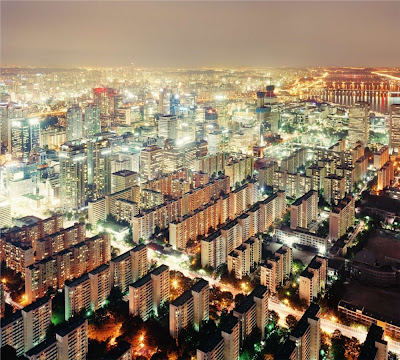 Photo: Described as our “best hope” the cramped confines of the city are designed to reduce the use of resources as well as reduce the distance between individuals and ideas. In reality, technological innovation, not the political shifting of demographics, has already helped reduce both, as well as reduce our need to “urbanize.” (photo credit: National Geographic)

In fact, a future of urbanization only makes sense if humanity is frozen technologically and that advances in transportation, energy production, manufacturing, and information technology cease to be made. Glaeser’s comments about reducing the space between people in fact undermines his entire argument for urbanization. Already, collaboration between people who have never met in real life, or who rarely ever meet physically is possible in ways even 10-20 years ago would have been quite impossible, thanks to technological innovation. The “reduction of space” between people needs not be physical and certainly doesn’t require urbanization.

Video conferencing is something that science fiction had long since predicted, and up until now had seemed like a far fetched fantasy. Now seeing and hearing someone on the other side of the planet can be accomplished by anyone with an Internet connection and a webcam. As Internet speeds increase the ability to collaborate more seamlessly with people remotely will only be enhanced. Similarly, advances in manufacturing technology, as mentioned in “Globalists’ Worst Nightmare” in regards to MIT’s Fab Lab project, will allow an increasing number of people to possess the means of advanced production in their garages or even on their own desktop, “printing” objects as easily as they now print images.

Video: MIT’s Fab Lab described. This is one of the many labs inspired by the original based at MIT.

During PBS’ Scientific American Frontiers episode “You Can Make it on Your Own” hosted by Alan Alda, Alda would examine a bike designed and made in MIT’s Massachusetts Fab Lab. The machines occupying a single room and available to be used by designers allowed Australian inventor Saul Griffith to create his own polycarbonate bike. Since the design is digital and manufactured by computer controlled machines, Griffith was able to email the design to his sister in Australia where she was able to use machines there to build it.

Griffith’s idea traveled at the speed of light from the US to Australia where it was manufactured and in the hands of the end user faster than any traditional model of economics could deliver, even if everyone crammed into densely populated cities as proposed by National Geographic and the bike factory was just down the street.

Video: Meet a real “progressive,” spacecraft designer Burt Rutan who in the first 2 minutes of his TED Talk makes a poignant observation of the human condition, “we stand a very big chance of losing our ability to inspire our youth to go out and continue this very important thing that we as a species have always done, and that is instinctively we’ve gone out and climbed over difficult places, went to more hostile places, and found out later maybe to our surprise that that’s the reason we’ve survived. ”

Human progress has always moved forward because of innovation and exploration. The myriad of political solutions paraded before us by economists and politicians are cheap substitutes compensating for their lack of imagination coupled with complete technical incompetence. Even their suggestions of putting “technocrats” in charge leaves much to be desired, especially so when the reins still lead back to their uninspired hands. The ability to solve problems on one’s own, self-sufficiently is inexorably linked to self-determination – not the cramming of papers into ballot boxes in pursuit of others to handle our responsibilities and destiny for us.

Cities are not “the best cure for our planet’s growing pains.” To find the real cure, a proper diagnosis must first be made. These growing pains are not due to “overpopulation” but rather the complete failure of global leadership to meet the challenge of protecting human freedom while managing the growth our ingenuity has lent us. Innovation spurred by proper technical education can immediately begin alleviating many of the problems we face pursuing antiquated economic models, industrial centralization, big-agri that is neither healthy nor efficient and many other problems born from our current paradigm.

If the government refuses to give people better, more meaningful education – this problem too is being solved technologically. In fact, anyone with an Internet connection now has access to a huge and ever-growing collection of MIT lectures, called “Open Course Ware” (OCW). Future innovations can allow us to continue to expand here on Earth and beyond. Just as exploration has expanded our habitat here on Earth, it will likewise make it possible for us to expand amongst the stars. 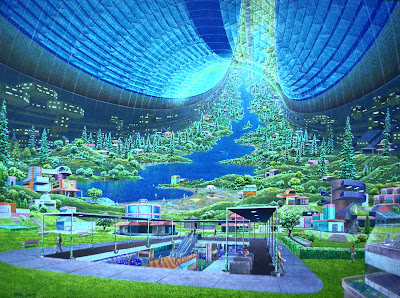 Image: No more land? Make some more. Commissioned by NASA in the 1970’s, conceptual artist Don Davis illustrated a torus-shaped space station that maintains artificial gravity through centripetal force – it was designed by a NASA Ames/Standford University study. While people may be taken by the same Pavlovian giggles that accompanied the scorn of concepts such as a heliocentric planetary system or the idea of manned flight, such space habitats are not only possible, they are inevitable. In space, there’s plenty of room to spread out. Human innovation may make compromises necessary in the short-term, but entirely unnecessary in the long-term.

Already we have a permanently manned space habitat orbiting over our heads – produced by incredible engineers, however tempered by bureaucracy, budget constraints, and politics they may be. It is entirely possible that if we took more control over our own destiny, instead of having it dictated to us by a self-serving political clique, we could not only marshal our resources toward more inspiring pursuits, but improve our access and use of available resources in ways we never imagined. The concept of post-scarcity already presents itself to us in more realistic terms as manufacturing goes from factories to our garages and desktops. As the cost of advanced manufacturing decreases and the means to manufacture is decentralized, the barriers to achieving what was once the exclusive realm of science fiction will likewise fall, while the decisions to proceed are likewise decentralized.

Politicians have a cage prepared for us, amply described in the United Nation’s “Agenda 21.” It relieves them of their responsibility to truly lead, and protects them from being replaced for their infinite incompetence. All that is necessary for us to avoid ending up in this cage, is for us to get active locally in devising solutions to the problems our “leaders” refuse to adequately and permanently address. We must not only recognize the faults within this current paradigm, we must reject it and replace it entirely. We can do so in a measured sensible way and we can start today by how we choose to spend our time, money, energy, and attention. Whether you excel in technology, agriculture, art, or even martial pursuits, there are local people with whom you can connect with and begin building the world you want to live in.