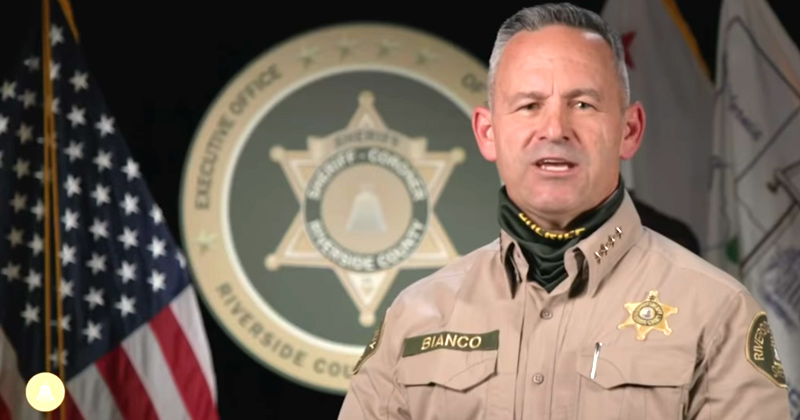 Riverside Co. Sheriff Chad Bianco says his department will fine and/or arrest people for not wearing a mask in his county.

Bianco released a video Monday night stating that this is a “valid order and enforceable by fine, imprisonment or both.”

Ironically, in an apparent attempt to stem criticism, the sheriff also claimed his department will “not be setting up any type of police state and this is not a declaration of martial law in Riverside County.”

The county of nearly 2.5 million, which is part of the ‘Inland Empire’ of Southern California east of LA, has attributed around 25 deaths to the coronavirus, the Gateway Pundit reported.

“Not everybody’s getting the message It started with staying at home, social distance and covering your face,” the sheriff added. “But now we change from saying that you should to saying that you must.”

In a similar story reported on Wednesday, a Colorado city has mandated residents to wear a face mask when they enter a shop or face jail time.

The Glennwood Springs city council voted 6-1 to demand residents wear masks “when entering and while inside of a place or conveyance open to the public” and “for all essential activities outside of their home.”

The lone councilman who voted against the ordinance, Tony Hershey, said it went too far because it went beyond the scale of the county and state governments.

“As a more conservative person, I can’t support micromanaging people’s lives,” he told the Aspen Times. “To some extent we have to legislate… but this is a city council, we should do it in cooperation with the county government and with the state government and, yes, with the federal government.”

The Chinese government’s dominance of propaganda is as slick as it is nearly invisible.