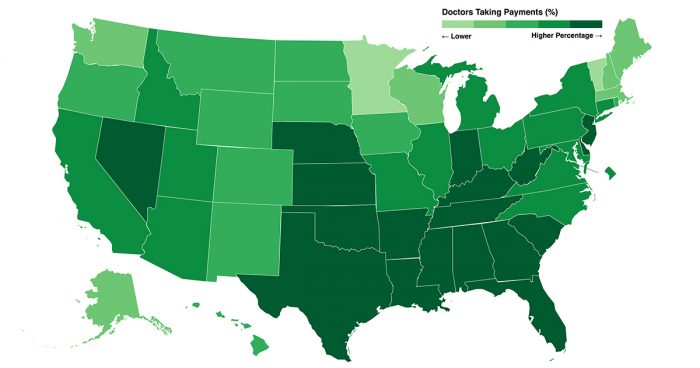 On May 18, the California Senate passed a bill that would ban pharmaceutical companies from giving gifts to doctors. The Senate voted 23-13 in favor of sending the bill to the Assembly. [1]

If the bill is signed into law, doctors would no longer be able to receive perks, such as airline tickets and lavish meals, from drug companies. According to Sen. Mike McGuire, the bill would lower healthcare costs, in part because doctors who receive gifts are more likely to prescribe costly drugs. [2]

Drug companies unload more than $1.4 billion a year on California doctors in the hopes they will promote and prescribe their products, said McGuire, a Democrat who represents a district west of Sacramento.

McGuire said that in 2014, doctors in his state received more gifts and payments from pharmaceutical companies than in doctors any other state. [3]

“While we have witnessed the cost of drugs rise over the past decade, industry profits have also grown significantly. We should be all standing for seniors and taxpayers to drive down the cost of prescription drugs.” [1]

According to a recent study by researchers at UC San Francisco, doctors who receive gifts from drug companies are 2 to 3 times more likely to prescribe name-brand drugs over cheaper, generic drugs. [2]

An even more recent study found that doctors at teaching hospitals are more likely to prescribe generic drugs when pharma reps are kept at bay.

Others have a different take on SB 790. State Sen. Ted Gaines argued that drug company gifts “provide the funding for research, for cures.”

“Why would we do anything to diminish the ability of pharma companies to be successful in providing these new products?” [3]

However, the bill would still permit doctors to receive salaries for participating in clinical trials, and would allow for the payment of meals up to $250 per year for individual doctors.

The bill is headed to the state Assembly, the California lower Legislature, for consideration.