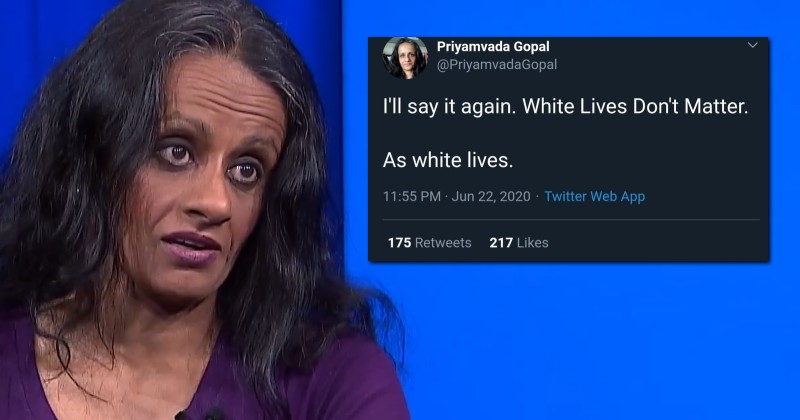 Cambridge University reacted to one of its academics tweeting “White Lives Don’t Matter” by ignoring the backlash and promoting her to a full professorship.

This prompted the launch of a petition to have her fired which currently has almost 15,000 signatures.

However, both the university and media outlets responded by trying to frame a narrative that Gopal was being “abused” by a hate mob, completely pardoning her for her overtly racist comments.

Despite the fact that Twitter has now removed Gopal’s original tweet for hate speech, Cambridge University itself has rewarded the academic.

“Thanks to everyone who wrote to @Twitter: the ludicrous ban has been lifted. I am therefore delighted to share with you personally, that last night Cambridge promoted me to a full Professorship,” tweeted Gopal. “The hate mails & threats are coming in non-stop but @CambridgeCops are following up.”

Thanks to everyone who wrote to @Twitter: the ludicrous ban has been lifted. I am therefore delighted to share with you personally, that last night Cambridge promoted me to a full Professorship. The hate mails & threats are coming in non-stop but @CambridgeCops are following up

She also blamed the backlash on “people who elect the likes of Trump and (Boris) Johnson.”

Thank you again–and to all of you, stay strong. We are up against a hugely ugly edifice full of sewage and bile. These people elect the likes of Trump and Johnson. We have no choice but to persevere. A luta continua!

Their approach to another academic, Noah Carl, was somewhat different after 500 academics signed a letter challenging Carl’s research on race and intelligence. He was swiftly dismissed.

Cambridge University also previously rescinded its offer of a visiting fellowship to Jordan Peterson after a woke mob complained about his stance on political correctness and after he appeared in a photograph with a man wearing a t-shirt that said “I’m a proud Islamophobe.”

Having formerly enjoyed a reputation as one of the most prestigious educational institutions in the world, Cambridge University is now proudly proclaiming itself to be a safe space for vile racists – and they’ll be teaching your kids!